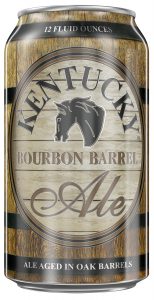 Designed to look like the bourbon barrel that the brew ages inside, the new cans will show consumers exactly what they are getting.

“We are very proud to be ‘The Beer of Bourbon Country,’ and our new cans embrace that, showcasing the best ingredient in the beer: the barrel,” said Ken Lee, master brewer for Lexington Brewing & Distilling Co.

Matt Cordle, regional sales manager, said, “It is very unique to have a barrel-aged beer offering available year-round to consumers, and this new package will allow us to access craft beer drinkers in ways we couldn’t with glass bottles.”

Kentucky Bourbon Barrel Ale cans will be available to consumers on Oct. 26, in Lexington, Kentucky, and across all 27 states of distribution the first week of November. Look for them at your local retail beverage outlets.