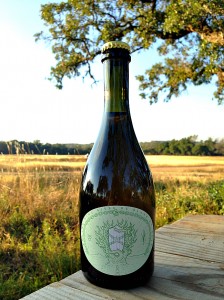 Austin, TX — We’re pleased to introduce Jester King Bière de Blanc du Bois — a barrel aged, sour beer refermented with Texas-grown Blanc du Bois grapes. Bière de Blanc du Bois is the creation of Adrienne Ballou, Head of the Barrel Program at Jester King. Adrienne came to us about two years ago, having previously studied viticulture at U.C. Davis and worked in the wine industry in France. During her time at Jester King, she has implemented numerous wine making techniques into our fermentations, including our use of punch downs during our fruit refermentations. Punch downs lead to better flavor and color extraction from the fruit during refermentation and aid in keeping acetic acid development (think vinegar) at bay. Bière de Blanc du Bois is one of the special projects that Adrienne has worked on over the last several months. Here is her description of the inspiration, process, and presentation:

“At the start of this year’s past harvest, our friend Doug Lewis, from Lewis Wines, contacted us about some extra Blanc du Bois grapes from east Texas that he would have available. Blanc du Bois, an American hybrid, is an interesting varietal that is often overlooked in the wine world. My interest in this varietal began during my time working in the experimental vineyards at U.C. Davis. The varietal was released by the University of Florida in the 1970s and is a cross between Cardinal, an American species, and Florida D6-148, a cross between several Vitis Vinifera species including Golden Muscat. The varietal was bred to be resistant to Pierce’s Disease, a bacterial disease that often affects grapevines in the south/southeast region of the United States.

When it comes to our fruit refermentations, we often look to the wine world for inspiration. Most winemakers, when making white wine, immediately press the skins off the juice prior to fermentation. For this beer, we decided to take an unconventional approach to how we would use the grapes; we decided to look to the world of orange wine. The techniques used to make these wines have their origins in ancient Georgian winemaking. What makes them unique is that instead of separating the skin from the juice, winemakers leave the skin, and sometimes the stems and seeds, in contact with the juice (or must) during primary fermentation. Some producers will even ferment and age the wine in amphoras placed underground with the skins in contact for several years. This type of aging provides a controlled environment for slow, oxidative aging. These techniques result in some of the most intriguing, complex wines I have had. On the palate, they present more along the lines of a red wine with bold structure and round tannins. In the aromatics you often get slight notes of oxidation, spices, honeysuckle, fruit, etc.

With the release of Bière de Blanc du Bois, we will also be offering glass pours of an orange wine produced by Donkey & Goat Winery out of Berkeley, CA. Donkey & Goat is one of the true pioneers of natural winemaking methods in the California wine industry. This wine, Stone Crusher, is made with 100% Roussanne grapes from El Dorado, CA. The fermentation is in open-top wood vats and has a 14 day contact time with the skins.”