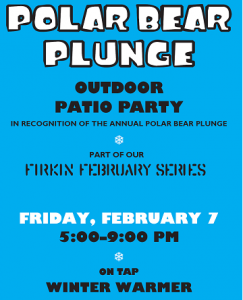 MEDIA, PA — On Friday, February 7 from 5 p.m. until 9 p.m., head brewer Bob Barrar of Iron Hill Brewery & Restaurant will host his annual Polar Bear Patio Party to kick off Firkin February. This year’s event, held outdoors on the patio regardless of how low temperatures may fall, will feature an ice bar and ice cream, with the brewery’s wildly popular Winter Warmer available for sale and served in festive cinnamon-rimmed glasses. Every Friday in February, the brewery will feature a firkin of a different seasonal beer, finishing on March 7.

“As the cold weather settles in across the region and we become more reluctant to leave our cozy homes, my team and I have five great reasons to get out and get social: our five Firkin February beers, each more delicious than the last and available exclusively beginning with our Polar Bear Patio Party,” says Barrar, Iron Hill’s most decorated brewer with 16 medals from the Great American Beer Festival. “From hearty stouts to a spring-worthy American IPA for the first week in March, we’ve selected some of our very favorite rare and special beers to feature, and our annual kick-off event is a perfect way to beat the cold!”

Featured Firkin February beers will include: Winter Warmer, a medium-bodied dark ale finished with classic winter spices; Bourbon Chocolate Porter, a classic porter that is dark and full of roasted malt flavor, aged in a bourbon barrel with chocolate nibs to accentuate the chocolate notes with hints of vanilla. ; Coffee Stout, a medium-bodied English-style oatmeal stout aged on coffee beans; American IPA, an American-style IPA with full malt flavor, pronounced bitterness and an overwhelming citrus hop presence; and Simcoe Buzz IPA, an American IPA brewed with a generous amount of Orange Blossom Honey and single hopped with Simcoe. All Firkin February beers are available beginning at 5 p.m. on the Friday they’re featured, on a pay-as-you-go basis, until they sell out.

Founded by home brewers Kevin Finn and Mark Edelson and restaurateur Kevin Davies in Newark, DE in 1996, Iron Hill Brewery & Restaurant has blossomed from one restaurant and brewery to ten locations across the mid-Atlantic, with several more planned for the next three to five years. Each restaurant is dedicated to producing and serving top-quality hand-crafted beers and cuisine in a warm and hospitable setting, and all are open seven days a week for lunch and dinner.

For more information about Iron Hill Brewery & Restaurant or their annual Polar Bear Patio Party and Firkin February, or to make a reservation at any of their locations, please visit www.ironhillbrewery.com, follow them on Twitter (@ironhillbrewery) and like them on Facebook. Facebook Link is not working.