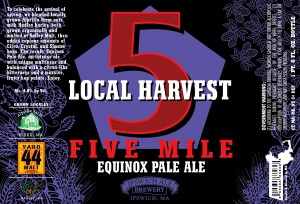 IPSWICH, MA – We created 5 Mile with the sole purpose of creating exceptional beers using local ingredients. 5 Mile’s mission is to use at least 50% MA ingredients while always having at least one ingredient from within 5 Miles of Ipswich. We believe there is nothing better than supporting local agriculture to make a product that is unique to Massachusetts and the North Shore.

Equinox Pale Ale was brewed with oats grown at Alprilla Farm down the road from the brewery in Essex,MA. The oats were roasted and caramelized at Valley Malt and combined with barley fromHadley,MA. “We finished off this brew with copious amounts of Citra, Crystal and Simcoe hops, because who doesn’t enjoy a kick of hops these days?” says Head Brewer Dan Lipke.

This beer is a medium-bodied pale ale with a unique malt characteristic, balanced off with a citrus-like bitterness and a fruity hop palate. The beer pours a hazy light amber color and goes down smooth at 4.8% ABV.

Our new offering is available in 22 oz. bottles and on limited draft and cask around the North Shore and Boston area. We only made one batch so when it’s gone it’s gone! Rob Martin commented “We’re delighted to be able to bring yet another local offering to the residents of Boston and the North Shore. This dynamic line up of limited edition beers continues to showcase the plethora of crops that we’re able to grow in our area. We’re proud to be able to patronize our local farmers it in this way.”

Equinox Pale Ale will make its debut at a series of beer festivals on the North Shore and Boston area leading up to its release party on Saturday, April 20th at the Ipswich Ale Brewery (23 Hayward Street, Ipswich, MA). Eager fans can catch a taste of it at the Salem Spring Fling on March 30th in Salem, MA, at the Drink Craft Beer Spring Fest on April 4th and 5th in Boston, MA and at the Beer Summit fest on April 12th and 13th in Boston,MA.

Residents of Boston’s North Shore were first introduced to Ipswich Ale during the spring of 1991. With nearly 21 years of history behind it, Ipswich Ale has been in existence longer than nearly every other craft brewer in New England. Since that time the Ipswich Ale portfolio of brands have developed into a tradition shared by not only the residents of eastern MA, but across the state,New Englandand now the country!

If you would like more information on this topic feel free to reach out to Mary Gormley by phone: 978-356-3329 or email: Mary@MercuryBrewing.com