“If we don’t know who our competitor is, we don’t know how to compete,” he argued. “Do we really know by whom we’re getting squeezed?”

During his keynote address, Thomas told the audience that the prospect of competing against “big pharma” and “big beverage,” as they potentially enter the cannabis space, or begin making non-alcoholic seltzers, worries him more than the idea of competing against other beer companies — or even wine or spirits.

“Meanwhile, we’re off arguing with ourselves over are you a brewer, are you independent, are you whatnot,” he said. “The beer industry would be better served if we rooted for A-B to get Bud Light right, while we were rooting for the taproom to become the place that communities are made and debates are had.”

Thomas added that as the internal strife among beer companies and industry organizations continue, cannabis is increasingly becoming a part of people’s daily lives.

“Whereas we basically demonize and we point a finger at beer becoming more a part of people’s lives because we forget that we’re not competing with each other to make people love beer more, we’re just competing for that occasion,” he said.

Thomas believes that beer companies should avoid “petty battles” or debates over labels as growing threats from outside of the beer category loom, particularly growing consumer interest in cannabis. 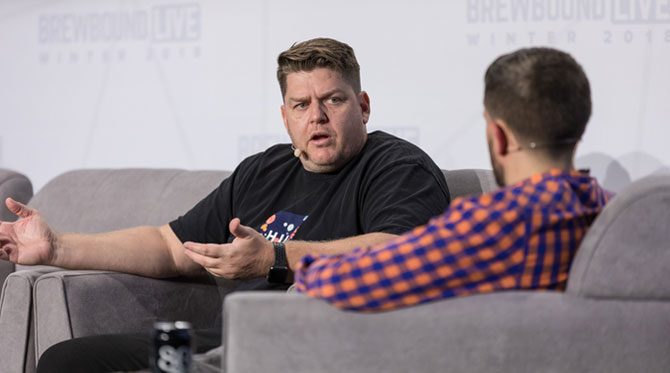 Similar to Thomas, Pabst general manager Matt Bruhn told craft brewers during the conference’s closing conversation that they should be supporting major beer companies’ lager brands, such as Pabst Blue Ribbon, since those offerings serve as recruiting tools to bring new legal-drinking-age consumers into the beer category.

“You should all be rooting for our success,” he said.

Bruhn noted that the vast majority of Americans’ beer of choice is domestic lagers, which make up 35 percent of all beer consumed in the U.S., he said. He also cited the PBR brand’s strong appeal to multicultural millennials as the reason why the company can successfully make inroads with younger consumers.

According to Bruhn, Pabst’s strategy moving forward is to attract new consumers to the beer category by repositioning PBR into a “lifestyle brand” with a number of line extensions including, non-alcoholic and lower ABV beers as well as seltzer and spirits. However, Pabst won’t be pursuing any more opportunities in the craft beer space, he said.

Although returning Pabst to growth is a “long-term objective,” the company is “not starting with a desire to get back to growth” but rather a goal of helping the entire beer category achieve growth, Bruhn said.

Bruhn added that Pabst’s portfolio of heritage brands — including Lone Star, National Bohemian, Stag, Olympia, and Rainier — as well as other lesser well-known offerings could help lead a “renaissance of American lager” beers. Part of that plan includes the relaunch of the the Lucky beer brand in the Bay Area.

“We want to be the company that makes American lager attractive to the next generation, and we have some of the coolest brands to do it,” he said. “That’s where our focus will be.”

Meanwhile, cannabis remained a hot topic throughout the conference. Prior to a panel discussion that explored the “Emerging Cannabis Market,” Jocelyn Sheltraw, the director of regional strategy for Headset, a cannabis data intelligence company, shared retail insights from states where recreational use of marijuana has been legalized.

According to Sheltraw, the average annual spend on cannabis is $375 in states where legal. Compare that to average American household’s total beverage alcohol spend of $435, and cannabis is quickly gaining ground.

Additionally, Sheltraw shared projections that sales of cannabis will surpass beer sales in California — the nation’s top state for beer sales — by 2020. Sheltraw also noted that sales of cannabis beverages are estimated to hit $50 million in Washington and Colorado by 2021. She added that now is the time to launch a cannabis beverage brand as there are fewer than 100 beverage brands currently available.

Although many brewers are looking to produce cannabis-infused beers, California’s Firestone Walker isn’t one of them. Co-founder David Walker is “not chasing psychoactive potions.”

“We set out to make great beer,” he said, adding the company plans to release a rosé beer and New England-style IPA in 2019. 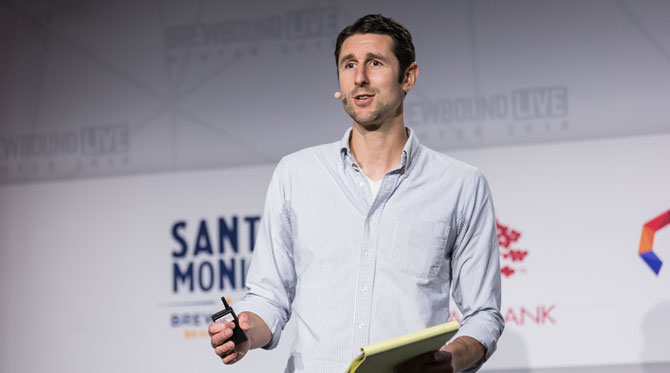 Meanwhile, Rhinegeist co-founder Bryant Goulding acknowledged that while the industry is currently focused on the potential impacts of cannabis, future challenges could be the result of a consumer shift away from on-premise retail, or even advancements in artificial intelligence.

“That could radically change our business one way or another,” he said. “I don’t think behaviorally people are going to get less healthy, unless there’s another great movie like Animal House that comes out and then it becomes cool again. But right now, it’s yoga and kombucha. I would say, know what you stand for and stick to your guns on that but not to the extent that you can’t accommodate what the market is telling you and what your people are telling you.”