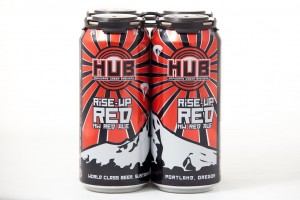 PORTLAND, Ore. — Hopworks Urban Brewery’s (HUB) is releasing its award-winning Organic Rise Up Red ale beginning in February. The Pacific Northwest Red is available in four-packs of 16 oz. cans, 22 oz. bottles and on draught at Oregon, Washington, Idaho and British Columbia bars, pubs and stores. The seasonal release won a gold medal at the 2009 Great American Beer Fest in the American Style Red/Amber Ale category and was one of the first beers the brewery produced.

Organic Rise-Up Red is a classic Northwest Red Ale featuring a rich and citrusy dry-hop aroma and a deep mahogany color. Healthy additions of Cascade, Centennial and Simcoe hops are balanced by a blend of caramel malts and a touch of chocolate malt. The beer checks in at 60 IBUs and 5.8% ABV.

Founded in 2007, Hopworks Urban Brewery is committed to brewing world-class beer as sustainably as possible using organic malts and hops sourced primarily from the Northwest. The company’s 20-barrel brewery produces 10,500 barrels of beer a year for HUB’s two brewpubs and for distribution in Oregon, Washington, Idaho and British Columbia. Hopworks incorporates a range of sustainable practices in its operation and makes every effort to protect “our” future with a thoughtful alternative. HUB is 100% renewably powered and “cradle to gate” carbon neutral.