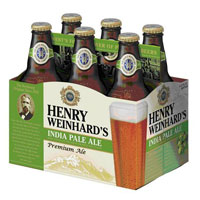 CHICAGO – Henry Weinhard spent considerable time and effort exploring the Pacific Northwest and searching for the perfect location for his brewery. More than 150 years later, beer drinkers across the country have the chance to explore the taste of the Pacific Northwest. This month, Henry Weinhard’s is launching three beers nationally: Private Reserve, Redwood Flats Amber Ale and Woodland Pass IPA.

The affordable, uncomplicated craft beers pair well with easy-going foods, such as nachos, burgers and steak.

“Today, we swim in an ocean of beer options, from ultra hoppy IPAs to stouts aged with kiwis in whiskey barrels,” said Katie Cowan, brand manager for Henry Weinhard’s. “While we respect these breweries for pushing the boundaries of beer, Henry’s is serving up rock-solid, uncomplicated beers that are textbook examples of Henry’s original motto: craft good ingredients into quality products.”

There’s never been a guy who cared more about making good beer easy to enjoy than Henry Weinhard. He left Germany in 1856 with nothing but a recipe, a copper kettle and a thirst to share his beers with the people of America. He was a savvy businessman, a straight shooter and generous to a fault. Legend has it, he even offered to pump free beer through a public fountain so people could enjoy it at will.

The three Henry Weinhard’s beers are now available in bottles, priced around $6.49 per six-pack. Woodland Pass IPA and Redwood Flats Amber are also available on draft.

In the spring of 1856, a young brew master from Germany traveled months aboard a cargo ship to America and arrived in Oregon Territory. Young Henry established his brewery outside of Ft. Vancouver and had a steady stream of thirsty trappers, soldiers and loggers to enjoy his high quality brews. Demand quickly increased for Henry’s fine brews and he continued to share them with the people by purchasing saloons, delivering beer to neighboring cities via horse-drawn carriages and even shipping beer aboard barges to San Francisco. By the end of the century, Henry became a leading citizen of Portland and was revered for his craft of brewing. He passed away in 1904 and left behind a wealth of friends and a tradition of high quality, authentic beers, brewed with ingredients from the Pacific Northwest, including Woodland Pass India Pale Ale, Redwood Flats Amber Ale, Private Reserve, Blue Boar, Northwest Wheat and Blonde Lager.