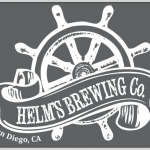 San Diego, CA-With the arrival of two 30-barrel fermenters this week, Helm’s Brewing Company has more than doubled their brewing capacity from 750 barrels per year to over 2,000 barrels per year. Established in November of 2012, Helm’s Brewing Company has continued to grow throughout its young 17 month history with popular beers such as Hop the RIPA, Wicked as Sin and Beeruccino. The two new fermenters coincide with Helm’s Brewing’s signing with Statewide Distribution Company and the launch of 22 ounce bottles in retail locations such as BevMo.

This is the second expansion in the young history of Helm’s Brewing Company, which added a 15-barrel fermenter last November. “This expansion is a great opportunity for us to keep up with the demand of Helm’s beer in San Diego, an will also give us the opportunity to expand our product to all of Southern California,” said Matt Johnson, General Manager at Helm’s Brewing Company. “This expansion will allow us to produce more than double what we were manufacturing before.”

Helm’s Brewing Company produces high quality and innovative craft beer designed not only to impress the connoisseur beer drinker, but also provide a fresh and local beer experience for the average consumer. The tasting room includes two 46” televisions to watch sports and with the brew-house attached to the tasting room it allows customers to view the brewery equipment as they enjoy a pint of beer. The tasting room is part of the community brewery concept where people can stop by after work, grab a beer on the weekend and enjoy conversation with friends. Helm’s Brewing company self-distributes kegs and bottles in San Diego, CA.