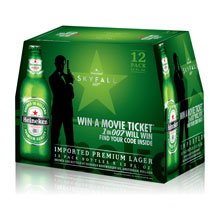 WHITE PLAINS, N.Y. — Heineken, the number one selling European Lager in the U.S., today announced the details of the next phase of retail and on-premise support around its unprecedented 360-degree activation celebrating the 15 year partnership with the James Bond Franchise. The program is set to coincide with the debut of SkyfallÔäó, the latest installment in the Bond franchise, in theatres November 9.?

Following the release of Heineken’s new television commercial “The Express,” the brand launches the Spysight mobile application. This new generation mobile platform leverages mobile, gamification, and GPS to create live playing fields in participating on-premise Heineken accounts, allowing players 21 years of age or older to join local competitions with the hope of winning prizes, such as movie tickets and more.

On-premise, local sales teams, armed with premium kits containing Heineken Spysight support materials will activate competitions at participating accounts. Ambassadors will engage users and guide them through the Spysight mobile app and sample Heineken (where legal). The Spysight platform digitally tracks competitions via the “Leaderboard,” allowing Ambassadors to present “Top Agents” with rewards and specials at the end of the competition.

This turn-key platform can also be activated by accounts without using Ambassadors. ??At retail, Bond-themed promotional packaging on 12, 18, and 24-packs of HEINEKEN include unique codes that allow consumers to enter for a “1 in 007” chance to win a Skyfall movie ticket. The Heineken Draught Keg value-added pack and Holiday themed Heineken Bond display and POS items will encourage shoppers to make Heineken a part of their Holiday celebrations. The custom designed value-added pack includes a 5L Draught Keg of Heineken Lager, two Heineken Star glasses, ten Heineken coasters and one Heineken skimmer. In addition, channel relevant IRC and MIR offers (where legal) will target driving out-of-section displays and larger basket rings for participating retailers.

Daniel Craig is back as Ian Fleming’s James Bond 007 in SKYFALLÔäó, the 23rd adventure in the longest-running film franchise of all time. In SKYFALL, Bond’s loyalty to M is tested as her past comes back to haunt her. As MI6 comes under attack, 007 must track down and destroy the threat, no matter how personal the cost. The film is from Albert R. Broccoli’s EON Productions, Metro-Goldwyn-Mayer Studios, and Sony Pictures Entertainment. Directed by Sam Mendes. Produced by Michael G. Wilson and Barbara Broccoli. Written by Neal Purvis & Robert Wade and John Logan.

?EON Productions Limited and Danjaq LLC are wholly owned and controlled by the Broccoli/Wilson family. Danjaq is the US based company that co-owns, with MGM, the copyright in the existing James Bond films and controls the right to produce future James Bond films as well as all worldwide merchandising. EON Productions, an affiliate of Danjaq, is the UK based production company which makes the James Bond films. The 007 franchise is the longest running in film history with twenty-two films produced since 1962. Michael G Wilson and Barbara Broccoli succeeded Albert R ‘Cubby’ Broccoli and have produced some of the most successful Bond films ever including CASINO ROYALE and QUANTUM OF SOLACE. They recently produced the 23rd film, SKYFALL.??