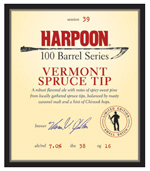 The Harpoon 100 Barrel Series Vermont Spruce Tip Ale is a showcase for a traditional yet seldom used brewing ingredient: spruce tips. The spruce tips were used in the same way finishing hops might be used, with additions late in the boil and in the whirlpool. Harvested at their tender, ripe, bright green peak, the spruce tips impart citrus, pine, spice, herbal and earthy notes. A host of malts, a hint of roasted barley and generous use of Chinook hops complement the unique spruce flavor.

Harpoon Vermont brewer Tom Graham created the recipe and brewed this 100 Barrel Series beer. “I first got the idea for this beer when reading a great book called ‘The Homebrewer’s Garden.’ When spring finally came to Vermont, my wife and I gathered a pound of spruce tips and I brewed a homebrew batch using them,” says Tom. “I was pretty pleased with the results so I shared the beer with my colleagues here at the brewery. From there it blossomed into this 100 Barrel Series beer.”

Sourcing the spruce tips was no easy task. It required collaboration with the Vermont Department of Forests, Parks and Recreation, and a team of enthusiastic spruce pickers. Harpoon staff and members of the brewery’s customer loyalty program, Friends of Harpoon, volunteered to help collect the spruce tips from Downer State Park over several days in the spring.

Like this beer’s 100 Barrel Series predecessor, the Catamount Maple Wheat, the Vermont Spruce Tip Ale celebrates Vermont and the craft beer drinking culture that thrives there. In June of 2000, Harpoon purchased a brewing facility in Windsor, VT and brews roughly 40% of their annual barrelage in the state. Visitors are welcome daily to visit the brewery in Windsor and sample Harpoon’s locally-brewed beers straight from the source.

Harpoon introduced the 100 Barrel Series in 2003 to showcase the individual brewing talents of their brewers. Every couple months, a different Harpoon brewer is invited to choose a style of beer, formulate the recipe, and brew the beer. That brewer’s signature can be found on the bottle label. The beers in the series are one-offs; they are brewed in limited batches and are available only until the batch sells out. Since the series began in May of 2003, 39 different styles of beer have been brewed. For a complete list of beers that have been released as part of the 100 Barrel Series, visit www.harpoonbrewery.com.

The Harpoon 100 Barrel Series Vermont Spruce Tip Ale is available in 22 oz. bottles with limited draft availability. Tom suggests pairing this hearty ale with rich, robust foods. A video featuring Tom talking about the beer can be viewed at www.harpoonbrewery.com/vermontsprucetip.

The Harpoon Brewery was founded by beers lovers, Rich Doyle and Dan Kenary. In 1986 Harpoon was issued Brewing Permit #001 by the Commonwealth of Massachusetts, since it was the first brewery to brew commercially in the state after a dormant period of about 25 years. Harpoon’s line of craft beer features its award-winning IPA and UFO Hefeweizen beers, along with four special seasonal selections. In 2000 Harpoon purchased a second brewery in Windsor, VT, making Harpoon the 9th largest craft brewer in the US. Harpoon has since introduced two lines of limited edition beers, the 100 Barrel Series and the Leviathan Series, as well as the all-natural Harpoon Cider made from freshly pressed, local apples. For more information about Harpoon beers and visiting the breweries, visit www.harpoonbrewery.com.