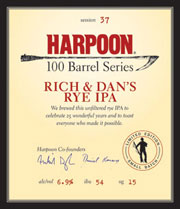 BOSTON- The Harpoon Brewery has announced the latest addition to the 100 Barrel Series, Rich and Dan’s Rye IPA. Below is the official announcement from the Harpoon website.

Brewing our Rye IPA has given us the opportunity to reflect on 25 years of Harpoon and yet another excuse to have a pint or two of beer together on the brewhouse floor. As all good partnerships require give and take, we went back and forth on the specifics of this unfiltered Rye IPA. In choosing this style, we pooled our individual ideas and preferences to create something that we would both enjoy and, we hope, something that you will enjoy as well.

We brewed the beer with our proprietary yeast – the same yeast we’ve used since first brewing Harpoon Ale – and some relatively new malt and hop varieties. The combination of Pale, Maris Otter, Rye, Caramel 60, Flaked Rye, and Vienna yield a complex malt body that stands up to the spiciness of the rye and the pronounced hop flavor. The rye also adds a reddish hue to the beer. The kettle additions of Centennial, Willamette, and Chinook, and the dry hop addition of Falconer’s Flight add a multidimensional hop character. This beer has a fruity, subtly spicy aroma, a full mouthfeel, and a dry finish.

We brewed this beer together to celebrate 25 years of Harpoon and as a toast to you for making more than two decades of brewing craft beer in New England so great.