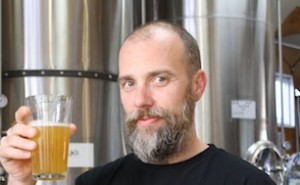 Half Moon Bay, Calif. — January 20, 2014 — The Half Moon Bay Brewing Company is looking forward to a busy and exciting 2014, especially now that Head Brewer Shane Aldrich has joined the brewing team alongside Brewmaster James Costa. Aldrich brings more than 11 years of experience and multiple medals to the Brewing Company, and he looks forward to working with Costa on some special small-batch brews, strong beers and European-style lagers and ales in honor of the upcoming San Francisco Beer Week. The Brewing Company is also offering an array of special menus and live music in celebration of the upcoming Super Bowl XLVIII, Strong Beer Month and Valentine’s Day, including Executive Chef Gaston Alfaro’s unique Beer and Dessert Pairing Menu from February 7-17 and a special Valentine’s Day Menu on Thursday, February 14. Children under 12 will also dine for free (with the purchase of an adult entrée) from the Half Moon Bay Brewing Company’s healthy Kids Menu on Valentine’s Day, which is ideal for parents who looking to affordably celebrate the holiday with the entire family.
For those looking for a lively and family-friendly place to watch the Seattle Seahawks take on the Denver Broncos in Super Bowl XLVIII on Sunday, February 2, the Half Moon Bay Brewing Company will be playing the big game on the flat-screen televisions in the bar area and out in the heated patio area, weather permitting. Chef Alfaro will also be premiering a new menu item especially for the occasion, his “Super Bowl” which includes four beer brat pops, three potato skins, three buffalo wings, a half order of pepper jack bites and multiple sauces.
As a sponsor and opening night participant of San Francisco Beer Week, the Half Moon Bay Brewing Company brings the celebrations to the Coastside with a tempting Beer and Dessert Pairing, available February 7-17. Each pairing is served on a signature surf board for $20 and includes:

Chef Alfaro has also created a special Valentine’s Day Menu that is sure to light the fires of romance that will be offered in addition to the regular dinner menu on Thursday, February 14.

The Fat Kids will be rocking out with original songs and classic R&B covers especially for Valentine’s Day on stage in the bar, which has open seating from 7 to 10 p.m. To reserve a table in the dining room, please call 650-728-BREW (2739) or visit hmbrewingco.com for reservations.

ABOUT THE HALF MOON BAY BREWING COMPANY
Recently selected by Men’s Fitness as one of America’s Top Ten Craft Breweries and byTravel + Leisure magazine as one of America’s Best Beach Bars, the Half Moon Bay Brewing Company is situated on picturesque Pillar Point Harbor overlooking the Marina in Princeton-by-the Sea. The Brewing Company expertly pairs a family-friendly, come-as-you-are atmosphere with a winning combination of fresh, sustainable seafood, craft beers, live music and an expansive, dog-friendly patio area with blazing fire pits to keep patrons warm on the waterfront. The Brewing Company is a casual coastal venue that has become an institution in the Half Moon Bay area for locals and visitors alike since opening in 2000. With its warm, wood-toned interior, expansive windows to the ocean, and walls dotted with surf memorabilia, the 6,000-square-foot restaurant and bar is reminiscent of a typical California surf shack. Behind the restaurant lie the 1,200 square-foot Mavericks Beer Garden and on-site brewery, where hand-crafted, award-winning Mavericks┬« Beers & Ales are piped directly to the bar. The Mavericks Amber Ale won a bronze medal in the 2012 World Beer Cup, and the Ocho Barril Saison won Best in Show for session beers and the gold medal in the Wood/Smoke Ale category at the California State Fair in June, 2013.