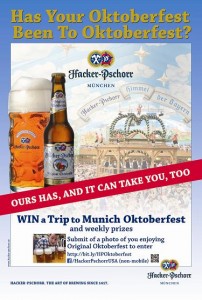 LITTLETON, Colo. — Hacker-Pschorr, Munich’s beer since 1417, is asking U.S. beer lovers “Has Your Oktoberfest Been to Oktoberfest?” and giving them a chance to attend the world’s most famous celebration in person.

“Hacker-Pschorr Original Oktoberfest is just that, the original beer of Munich Oktoberfest,” said Charles Stanley, U.S. brand manager for Hacker-Pschorr. “There are a lot of Oktoberfest-style beers being brewed outside of Munich now, including in the U.S. And while many of these are good beers, they have never been served at the event itself.”

If drinking the original beer of Oktoberfest isn’t enough of a reward in itself, Hacker-Pschorr will also be sending two lucky beer lovers to Oktoberfest 2015 in Munich. To enter, simply post a photo of you and friends enjoying an Original Oktoberfest to the sweepstakes site.

And Hacker-Pschorr has one more treat in store this fall: the first ever U.S. release of Festbier.

“Festbier is like the younger, but equally potent, brother of Original Oktoberfest,” said Stanley. “Original Oktoberfest was the only beer served in Hacker-Pschorr’s Oktoberfest tents for many decades, but more recently we’ve been serving a lighter-colored, slightly dryer lager called Festbier. This is the beer that today’s Germans think of as the quintessential Oktoberfest bier, and it’s available in the U.S. for the first time ever this season.”

Festbier is available exclusively in 16.9 oz swing top bottles, and only in limited quantities. It is available to distributors across the U.S. now, and beer fans can expect to start seeing it soon.

Hacker-Pschorr is truly dedicated to the art of brewing. Since 1417, Hacker-Pschorr has focused on quality ingredients, artful crafting, and fresh flavors. Hacker-Pschorr beers have always been brewed in accordance with the Reinheitsgebot (purity law) of 1516, which mandates that beer brewed in Bavaria consist of only malted barley, water and hops. Other styles available from Hacker-Pschorr in the US are Weisse, Weisse Dark, Munich Gold, and Munich Dark. Visit http://paulanerhpusa.com/hacker-pschorr/ for details.

Paulaner HP USA, purveyor of the world’s finest beers, is headquartered in Littleton, Colo., and imports Paulaner, Hacker-Pschorr, Fuller’s, O’Hara’s, Fr├╝li, and Dixie beers, as well as Fuchen herbal liqueur. This list of fine imports is available throughout the United States wherever quality beers and spirits are sold. http://paulanerhpusa.com.