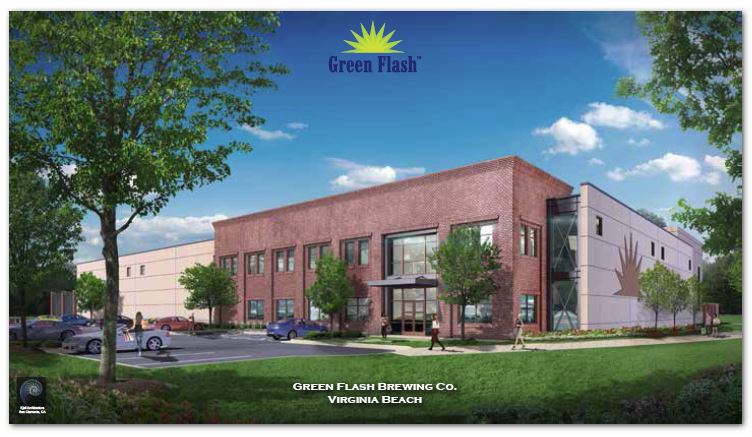 The San Diego-based company said it will break ground on a $20 million, 58,000 sq. ft. Virginia Beach, VA location later this year. The new facility is expected to open in 2015 and will eventually be capable of churning out 100,000 barrels annually.

“We sell about 40 percent of our beer on the East Coast,” he said. “Freight is a big concern for us and we don’t see that going down anytime soon.”

Nonetheless, the decision to invest $20 million in a facility located more than 2,700 miles away from San Diego was a risk for a company that brewed just 42,000 barrels of beer in 2012. But it was one that Hinkley had no problem tackling head-on.

“Of course there is risk in it,” he told Brewbound in September. “But the financial constraints on investment are not as much of a concern as the lifestyle for our employees.”

And the new Virginia Beach location should fit Green Flash’s lifestyle perfectly. In many ways, it’s similar to the company’s headquarters in San Diego. It’s coastal, a military town and popular tourist destination — all qualities that jibe with the company’s personality.

“The Mid-Atlantic region provided logistical advantages,” said co-founder Lisa Hinkley in a press statement. “Virginia is a great place to do business, has a developing craft beer culture, and Virginia Beach felt like home,”

But Green Flash may have finally settled on Virginia Beach — among a number of other East Coast locations the company was scouting — for more pragmatic reasons than just its sandy coastline. Market data information provider Symphony IRI Group’s has identified its Mid-South region — which includes North Carolina, Tennessee, Kentucky, West Virginia, Virginia, Maryland and Delaware — as one of the country’s fastest growing craft beer markets. The research company said craft dollar sales were up 17.3 percent in that region in 2012. SIG also pegs craft beer’s dollar share in Virginia supermarkets at 11.5 percent. In other words, Virginians want more craft beer.

In an effort to build camaraderie amongst its new brewing brethren and to help build the state’s craft beer segment even further, Green Flash has established a $10,000 credit with White Labs — a San Diego-based yeast and fermentation company serving the beer industry — for the Virginia Brewer’s Guild. The credit was created as a resource for Virginia’s newer breweries to engage in product testing in an effort to help fuel continued growth.

Green Flash beers are currently distributed in 38 states and the company plans to build a national footprint after opening the new brewery. It will also hire 40 new employees.