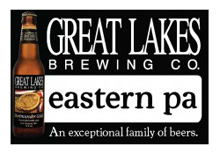 CLEVELAND, OHIO – Great Lakes Brewing Company (GLBC), Ohio’s most celebrated craft brewer of award-winning lagers and ales, announces its plan to expand into the Eastern Pennsylvania market with All Star Distributing on September 24, 2012. GLBC’s products are currently available in Western and Central Pennsylvania and Philadelphia. Expansion into the new Eastern Pennsylvania territory will serve the company’s strategic growth plans. Customers can expect to see GLBC’s year-round family of beers in package and draft, as well as GLBC’s “Taster’s Pack” (a sampler 12-pack).

The new market rollout will involve multiple customer appreciation events, meet-and-greets, tastings and giveaways throughout the area. GLBC co-owner Pat Conway says of the expansion, “Many breweries choose a strategy of being a mile wide and an inch deep. We prefer to penetrate deeper into existing markets. Entering Eastern Pennsylvania is a logical extension of that idea. We’ve served Pennsylvania for years so finally getting our products to this part of the state will satisfy the many accounts that have been asking for our beer for a long time.”