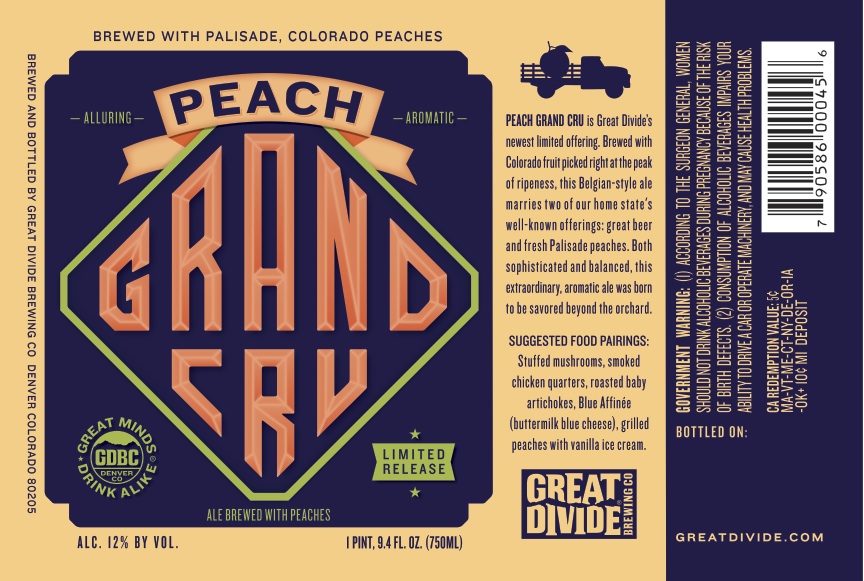 First brewed as a single 7-barrel pilot batch in 2012, Peach Grand Cru is a true small batch success story. With its powerful fresh peach aroma and complementary Belgian yeast character, visitors to the Great Divide Tap Room reveled in the beer’s ability to extend peach season beyond summer’s end. Overwhelming demand for the beer inspired the brewery to immediately start planning for a larger batch for 2013’s harvest season. A larger batch, however, was no easy feat, as over 1600 pounds of peaches are used to brew one 50-barrel batch.

In addition to the 750ml bottles, limited draft will also be available in select markets where Great Divide distributes. With a scheduled early October release, the brewery intends for Peach Grand Cru to be consumed fresh, but savored well beyond the orchard.

Great Divide brews some of the globe’s most balanced yet assertive and flavorful beers. These beers have landed an impressive amount of acclaim, earning 17 Great American Beer Festival medals and 5 World Beer Cup awards. Named “Top Brewer In Colorado” by Ratebeer.com (2013), 12th on their list of “Best Brewers In The World” (2013) and 7th on BeerAdvocate’s “All-Time Top Breweries On Planet Earth” (2010), Great Divide is one of America’s most decorated breweries. But why take their word for it? Crack open a bottle and decide for yourself.