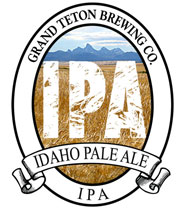 The IPA, Idaho Pale Ale, is a special 30 barrel batch made exclusively with ingredients from Idaho.

“We really believe that Teton Valley, Idaho is one of the greatest places on the planet to brew beer,” said Chuck Nowicki.

Nowicki pointed to the their ability to access Idaho grown barley and hops as well as the ability to use Teton Mountain spring water as reasons for the brews unique flavor.

“The best and most expensive malting barley comes from our own backyard,” he said.

The Idaho Pale Ale is done in the IPA style, checking in at 7.0% ABV and 90 IBU’s. Nowicki said drinkers can expect a spicy hop character that is more in line with the west coast IPA style.

“It is more bitter than IPA’s we have done in the past to appease the hop-heads,” said Nowicki

The Full press release from Grand Teton Brewing Company can be seen below.

The hops are the highlight of this beer, providing a big resinous flavor and a persistent bitterness. A light body and clean malt character allow the hops to shine through with tremendous clarity. Hop heads across the country will be delighted to see that the brewers in Idaho can craft an IPA every bit as hoppy as their west coast counterparts.

“We’ve long maintained that Teton Valley, Idaho is the best place in the world to craft beer,” said Brewmaster Rob Mullin. “For the first time ever we’ve been able to prove it with an exclusively Idaho-sourced beer.”

“This beer is now possible because Idaho hop farmers are no longer tied to exclusive contracts with the world’s largest brewery,” Mullin continued. “We’ve been extremely impressed with the quality of these local hops and are inspired to use more and more of them.”

Grand Teton Brewing Company has always brewed with pure Teton mountain spring water. “For my money, ours is the best water on Earth,” claimed Brewmaster Mullin. “We’re brewing with pure, clean Teton mountain glacier water, filtered over the course of 300-500 years by Teton mountain limestone and granite before it surfaces at a spring a half mile from the brewery. We don’t treat our brewing water or add anything to it. It’s been our passion over the years to create the best-possible beers to showcase our special Victor, Idaho water.”

Idaho Pale Ale will debut the week of March 21 at several of the best craft beer bars and restaurants in and around San Francisco, home of the 2011 Craft Brewers’ Conference (March 23-26.) It will also make limited draft-only appearances at Grand Teton Brewing Company’s Victor, Idaho brewpub.

“This beer is already a favorite of the brewers. If it gets a positive response, we promise to brew it again in the future,” concluded Mullin. “In fact, we’ve already started talking about a fresh-hop version for the fall.”

The first batch of Idaho Pale Ale is available on draft at select locations in California and at the Grand Teton Brewpub in Victor, Idaho. Other Grand Teton Brewing Company beers can be found in Arizona, California, Colorado, Idaho, Illinois, Kansas, Massachusetts, Minnesota, Missouri, Montana, Nevada, South Carolina, South Dakota, Washington, Wisconsin and Wyoming! Call the brewery at 1-888-899-1656 for information and availability on this exciting new product.