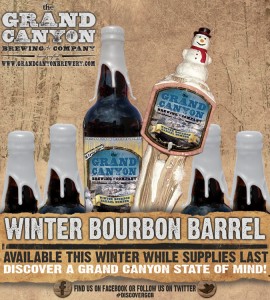 Phoenix, AZ —The holidays are near and that means it’s time for cozy fireside nights and the Grand Canyon Brewing’s Winter Bourbon Barrel Brown. Set to release in early November, this year, you’ll get a chance to discover what winter at the Grand Canyon really tastes like.

The 2014 batch is packed with the full body flavor of malt, bourbon and maple syrup. Plus, there’s an oak aged flavor bomb packed inside for an added depth of flavor. Winter Bourbon pairs well with beef dishes and rich cream sauces.

“We’re excited to bring Winter Bourbon back a bit earlier this year after successful first year launch in late 2013. This year’s batch has a stronger flavor profile and a smooth finish,” said Alexander Phillips, director of sales and brand ambassador.

The Brass Tap in Mesa is hosting a special Winter Bourbon Barrel release party on November 10, 2014 with one regular seasonal tap and a second that will be ran through a Randal beer flavor infuser packed with toffee and vanilla beans. Stay tuned to the Grand Canyon Brewing Company Facebook page for more information on that at www.facebook.com/grandcanyonbrewery.

The Grand Canyon Brewing Company is located in historic downtown Williams, AZ at 233 W. Route 66. This family owned and operated microbrewery produces a dozen different specialty craft brews each year. They recently began production on a new 22 oz Bomber bottle featuring their revolutionary new Flavor Bomb beer flavoring widget. For more information about the Grand Canyon Brewing Company, visit online at www.grandcanyonbrewery.comand be sure to “like” us in Facebook at www.facebook.com/grandcanyonbrewery.