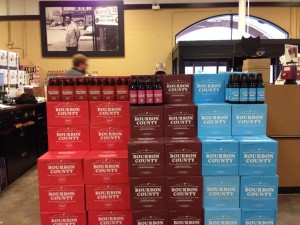 CHICAGO — This Black Friday, holiday shoppers will be lining up for one of the most-coveted gifts of the season — Goose Island’s new batch of Bourbon County Brand barrel-aged beer, including three new varieties. On Friday, November 29, the Chicago-based brewery will release select quantities of the fan-favorite stouts nationwide and hold special Bourbon County Brand Stout (BCBS) events in Chicago, New York, San Francisco and Austin.

The originator of the entire bourbon-barrel aged beer category, BCBS is an imperial stout that was first produced in 1992 in honor of the 1,000th beer batch at Goose Island’s Clybourn brewpub. Since that inaugural BCBS brewing, Goose Island has released several Bourbon County Brand variants, including Coffee, Vanilla, Bramble Rye, and Cherry Rye. The Friday after Thanksgiving, craft beer connoisseurs can begin experiencing the brewing-and-aging expertise in the 2013 vintage of the following selections of Bourbon County Brands:

“Our Bourbon County Brand Stout has been in high-demand since we first brewed it in 1992. At last year’s Black Friday release event in Chicago, the beer sold out in just a few hours,” said Brett Porter, Brewmaster at Goose Island Beer Company. “We’re thrilled about this year’s release because we’re now able to bring one of our most coveted beers to more people than ever before. We hope beer drinkers all over the country are as excited for Black Friday as we are.”

This is the fourth year Goose Island is releasing Bourbon County Brands on Black Friday. In 2012, at the release event in Chicago, more than 400 people lined up for a chance to purchase Bourbon County Brand Stout and its variants. In 2013, with special events in three more cities, the company expects even more people to come out for the opportunity to buy the limited-release beer.

Founded in Chicago in 1988, Goose Island is one of the most successful craft breweries in the Midwest and produces some of the most popular, and award winning, beers in the U.S. Since 1989, Goose Island beers have won a variety of awards at acclaimed beer events including the World Beer Championships, World Beer Cup, European Beer Star, World Expo of Beer and the Great American Beer Festival (GABF).

After Another Year of Growth, Mast Landing Looks to Expand its Offerings