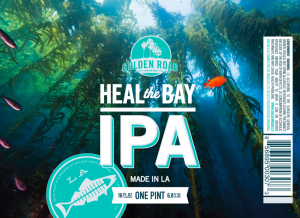 LOS ANGELES — L.A.’s Golden Road Brewing and Southern California’s beloved environmental nonprofit, Heal the Bay, have once again teamed up for the second annual unveiling of Heal the Bay IPA. The summer release of the brewery’s seasonal Custom IPA Series benefits its nominative organization and the region’s watersheds through (drinkable) awareness efforts and proceeds from beer sold at Southern California Whole Foods Markets and other local retailers.

“I saw a Heal the Bay beach cleanup after surfing one Saturday in Santa Monica and was immediately drawn to the organization,” said Meg Gill, co-founder of Golden Road Brewing and newly elected Heal the Bay Board member. “Many of us at Golden Road have a personal connection to Heal the Bay’s mission, and as a brewery, we are equally committed to investing in protecting our local waters.”

For nearly 20 years, Heal the Bay has been working to preserve Southern California coastal waters through community action programs, education and partnerships like that with Golden Road. After an overwhelming response last year, the brewery has ramped up production of Heal the Bay IPA for this release and increased distributor contributions for a bigger impact to the environmental organization.

“Golden Road Brewing understands the importance of the Los Angeles River that they call home and how that body of water connects to the bigger picture that Heal the Bay regularly advocates for,” said Afarin Davari of Heal the Bay. “For Heal the Bay, this partnership illustrates the ideal relationship between our mission and a socially responsible brand.”

Golden Road’s brewmaster, Jesse Houck, created what has become a highly acclaimed beer – one of Southern California’s three most important according to the LA Times – based on his passion for the organization as a scuba diver and a seasonal recipe synonymous with the purity of water. A mix of New Zealand (Nelson Sauvin and Motueka) and Pacific Northwest (Citra, Centennial and El Dorado) hop varietals yields a bright, summer IPA with tropical, citrus-forward flavors. Heal the Bay IPA comes in at 6.8% ABV and is 100% two-row malt.

Just in time for a belated Earth Day present, Heal the Bay IPA will be tapped at the Pub at Golden Road this Thursday, April 24, and will leave the brewery for market distribution the following week. To kick off the beer’s return, Golden Road’s team will join Heal the Bay this Saturday, April 26, for a Nothin’ But Sand cleanup at the Santa Monica Pier from 10 a.m. to noon. Post cleanup, Heal the Bay IPA will be available on draught at The Lobster, Big Dean’s Ocean Front Cafe, The Albright, Ristorante Al Mare, Del Frisco’s Grille and Loews Hotel.

Cans of the summer custom IPA will be available in early May. Four packs will retail at $11.99 and feature Golden Road’s new, more environmentally conscious packaging of 100% recycled, full-color printed chipboard boxes. Heal the Bay IPA will also be part of Golden Road’s new summer IPA mix pack to be released mid-May. The nine-pack will include three cans each of Heal the Bay IPA, Point the Way IPA and Wolf Among Weeds Imperial IPA.

Heal the Bay IPA is the third in Golden Road’s Custom IPA Series. The seasonal lineup of specialty brews showcases California’s enthusiasm for hop-forward IPAs and includes 2020 IPA, released earlier this year in partnership with the L.A. River Revitalization Corporation and its Greenway 2020 project, and the ode-to-winter Better Weather IPA, first released in November of last year.

For more information about Golden Road Brewing and its partnership with Heal the Bay,

About Heal the Bay

In 2011, beer enthusiasts Meg Gill and Tony Yanow founded Golden Road Brewing to bring fresh beer to the local market in the most sustainable way possible. Brewed and canned in Los Angeles, Golden Road’s year-round offerings include Point the Way IPA, Golden Road Hefeweizen, Get Up Offa That Brown, 329 Lager and Wolf Among Weeds IPA. Golden Road is committed to engaging and supporting the growing community of socially-minded beer enthusiasts in Los Angeles. For more information, please visit goldenroad.la.