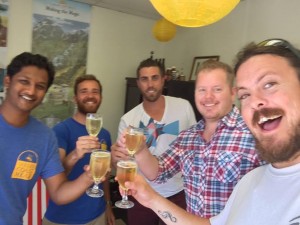 Statewide Beverage Company will begin distributing Golden Coast Mead’s four varietals beginning June 1st, 2014. These include the award-winning Orange Blossom as well as California Oak, Savage Bois, and “Something, Something Sour Mead.” Golden Coast Mead’s CEO, Frank Golbeck, said of the news “This is a really special moment for both companies. It represents Statewide Beverage’s first foray into the category of mead and the first time Golden Coast Mead is willing to let a third party distribute our products. It was really important that whoever we partnered with in distribution shared our values and our vision and we were lucky enough to find that partner in Statewide.”

Troy Magnusson, General Manager of Statewide Beverage said of the agreement “We couldn’t be more excited to add Golden Coast Mead to our Craft portfolio. The mead category grew 130% from 2012 to 2013, and we feel our incredibly talented partners at Golden Coast Mead will trail blaze the movement within Southern California with their unique and innovative offerings”

On the same day, it was announced that Golden Coast Mead’s Orange Blossom Mead received a silver medal in the 2014 San Diego International Beer Competition. The company’s head brewer, Maurey Fletcher, said of the win, “Our Orange Blossom Mead is a great beginner mead because of its simplicity. Its only ingredients are varietal honey, Palomar Mountain Spring Water, and brewers yeast. This mead is great because it really shows the terroir. The bees gather nectar from orange groves and their honey really takes on the flavor from those orange blossoms. When you sip on our Orange Blossom Mead it’s like walking through an orange grove.”

Golden Coast Mead is San Diego’s first and largest meadery, located on Oceanside Blvd 5 miles the coast. They produce four varieties of honey-based alcoholic beverages. Founded in 2010, the company is known for using all-natural ingredients local to the Southern California region and taking a strong environmental stance in their production. In addition to donating 1% of all revenue to environmental causes that support bee populations, the company maintains several beehives. Contact: 4089 Oceanside Blvd Suite H, Oceanside, CA 92056.