A love for beer and a sudden inability to drink it led Karen Hertz and Twila Soles to open separate businesses.

And the two womens’ businesses are interconnected. Hertz brews Holidaily’s beers with gluten-free malts such as millet and buckwheat produced by Grouse.

Hertz started Holidaily after a diagnosis of thyroid cancer and an autoimmune thyroid condition called Hashimoto’s disease, which led her doctors to recommend a gluten-free diet. At the time, she was working as a customer service and logistics representative for wholesalers in MillerCoors’ central region, so beer was a big part of her life.

“I loved beer and I felt like with the gluten-free diet overall, I could either cut things out or there were decent replacements for them, except for beer,” Hertz said. “I don’t love cider, and the gluten-free beers that were out just didn’t taste great to me, and it prompted me to start learning why.”

Hertz’s research showed that most gluten-free beers were brewed with syrup made from sorghum, a gluten-free cereal grain.

“Instead of utilizing grain, breweries and brewers were just skipping the grain and throwing syrup in the boil, and that’s why it tasted not great,” she said. “It tasted like beer made with syrup.”

By coincidence, Hertz discovered that the country’s only gluten-free malt supplier, Soles’ Grouse Malt House, was an 80-mile drive from Golden. 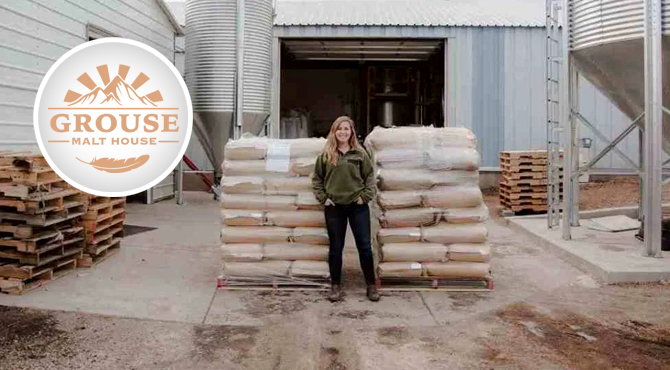 After earning a master’s degree in food science at Colorado State University, Soles founded Grouse in 2013. The inspiration for the business struck her while on a field trip for a brewing elective class she was taking. Soles noticed that a classmate wasn’t sampling beers and asked why. The woman explained that she had Celiac disease and could only drink gluten-free beers, which she didn’t like.

“I went to the store that night and I got some of the gluten-free beer that was available at that time — that was 2009 — and I took it personally that the beer was so bad and that was the best thing she could partake in,” Soles said. “I made it my personal mission to make her a great tasting gluten-free beer.”

When Hertz started Holidaily in 2016, she consulted Soles for grain combinations for recipes. Hertz found that malted millet and buckwheat worked best for Holidaily’s beers, although Grouse also offers quinoa and corn. Colorado is the nation’s leading producer of millet, so Soles is able to source plenty of raw product locally.

“When we started Grouse, we knew it was very important to provide a large range of malt to our customers,” Soles said. “If we, for example, didn’t come out with any roasted products it would be very challenging for our customers to make anything from a red ale to a stout.”

According to Best Gluten Free Beers, a blog for gluten-free beer drinkers, Holidaily is one of 12 dedicated gluten-free breweries in the U.S., meaning that the brewery uses only gluten-free grains and only brews gluten-free beers, which eliminates the possibility of cross-contamination.

Holidaily is also one of only three breweries to be certified by global advocacy organization the Gluten Intolerance Group, whose website’s list of certified gluten-free producers includes MillerCoors’ breweries in Fort Worth, Texas, and Milwaukee, Wisconsin. To certify a business, the Gluten Intolerance Group tests its products, audits its facilities and trains its staff. Although the certification is voluntary, Hertz said the peace of mind it brings makes it worthwhile.

“We go the extra mile because I want the consumer to know that what they’re drinking is safe,” she said. “It’s an icon that, as a consumer myself, I look for on other products.”

Since its opening, Holidaily’s production has grown steadily to 1,174 barrels last year, according to trade group the Brewers Association (BA). The company expanded into a new production facility in May across the street from its 10-barrel brewpub.

Though the BA doesn’t track sales of gluten-free beers, it has included a gluten-free beer category in the GABF competition since 2007. In the first year, eight beers were submitted, and Anheuser-Busch’s RedBridge won the gold medal. This year, 59 entries were submitted and the gold medal went to Holidaily’s Boombastic Hazy IPA, a New England-style IPA that checks in at 7% alcohol by volume.

“The gold medal was really fun and a reassuring piece, like ‘Yup, we’re on the right track,’” Hertz told Brewbound.

Market research firm IRI does not break out gluten-free beers in its reporting, but RedBridge is included in its A-B scoresheet. Dollar sales of the brand, which launched in 2006, are down 11%, to more than $3.1 million year-to-date through November 3.

Although the segment itself declined 9% that quarter, Omission gained share. Omission beers are brewed with malted barley, which is then removed. According to Omission’s website, all beers have fewer than 10 gluten peptide parts per million.

In the next five years, Hertz hopes to expand Holidaily’s distribution to other states, which the new 10,000-barrel production facility will enable.

“We’ll definitely grow our taproom here and keep this local presence, but we are focused on getting beer out and distributing beer to people,” she said.

Holidaily’s taproom threads the needle between spreading the gluten-free masses and offering beer-loving locals a place to imbibe. Its patrons are a mix of locals who enjoy the beer and people who adhere to a gluten-free diet and make the pilgrimage to Holidaily when visiting Colorado.

“We definitely get people that seek us out, like they land at Denver International Airport and stop at Holidaily on the way to the mountains because they’ve heard about it,” Hertz said. “We’re the only one here, so it’s a destination for a lot of people. But we have regulars that have nothing to do with gluten-free and just like our taproom and our beer.”