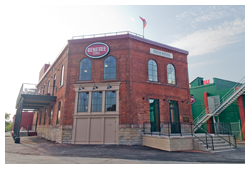 ROCHESTER, NY — The Genesee Brewery held a ribbon cutting ceremony on Aug. 31 to unveil The Genesee Brew House and announce details of its grand opening. The public grand opening celebration on Sept. 8 will feature a free concert, tours of the pilot brewery, beer tastings for individuals who are 21 years of age or older, food and more.

“For over 130 years, The Genesee Brewery has been a vital part of our local economy and has helped put Monroe County on the map. Today’s opening of the Brew House signifies the many great things that are in store for our region. I applaud the public-private partnerships that made this investment possible and wish North American Breweries continued success in revitalizing this historic jewel of our community,” said Monroe County Executive Maggie Brooks.

In November of 2011, The Genesee Brewery announced plans to renovate the former packaging center in Rochester’s Northeast neighborhood. The majority of the development project is complete but the outdoor concert and event space will be completed in spring 2013. The company has invested nearly $3.9 million into the project.

“The Genesee Brew House will be a destination for Rochester residents and visitors alike,” said Mayor Thomas S. Richards. “We look forward to the vibrancy that people will bring here as they come to dine, see the exhibits, sample the brew and take in the newly opened vistas of the High Falls and Genesee River gorge.”

About the Genesee Brew House:

Once a century-old packaging center, The Genesee Brew House has transformed the 9,200 square-foot space into a beer destination for Upstate New York and beyond. The first floor of the Brew House features interactive exhibits, multi-media content, a gift shop and a pilot brewery complete with a tasting bar. Upstairs, there is a pub-style restaurant with a 41-foot bar (hand-crafted out of old, wooden Genesee brewing tanks), outdoor terrace seating and a rooftop patio.

“We were literally sweeping the sawdust off the floors yesterday,” said Mark Minunni, director of engineering and project manager for the Genesee Brew House. “Despite our aggressive timetable, we’re excited about the 360-degree beer experience we have created through the Genesee Brew House. Along with our fellow brewers here, we hope to put Upstate New York on the map as a destination for beer lovers.”

The Genesee Brew House tells a story of the Genesee Brewing Company that dates back to 1878. The brewery lays claim to being one of the oldest and longest continually operating breweries in the United States. By using an eclectic mix of vintage barrels, reclaimed wood, exposed ceiling, neon signs, new technology and modern exhibits, The Brew House will bring Genny’s story alive for generations to come.

Note: The Genesee Brew House project was originally estimated at $2.6 million but has come in at $3.9 million due to the following project upgrades: enhancement of the outdoor festival site and rooftop patio, as well as expansion of the pilot brewery.