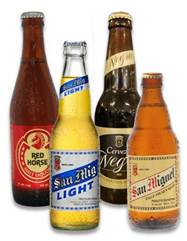 Irvine, CA — Premium beverage importers and distributors, G.K. Skaggs and Young’s Market Company Hawaii, have teamed up to be the exclusive suppliers of San Miguel beer to Hawaii. In an effort to meet the needs of a growing consumer demand, San Miguel Light, San Miguel Red Horse, Cerveza Negra and famous San Miguel Pale Pilsen will all be available throughout “The Aloha State”.

The San Miguel Brewery was established in 1890, and is the oldest brewery in Southeast Asia. With its 120+ years of brewing experience, San Miguel Brewery has become the world’s 20th largest global beer brand. In 2010, renowned importer of premium beverages, G.K. Skaggs, was granted the exclusive import rights to distribute the classic Filipino beer in select U.S. states. With this month’s Hawaiian deal, G.K. Skaggs will now be in charge of the supply of San Miguel beer in 19 U.S. states.

“With San Miguel being such an iconic beer brand, we are proud to be the authorized suppliers to the Aloha State. We have worked very hard on this expansion which represents G.K. Skaggs’ commitment to supplying premium beverages on a national scale. We are excited to be teaming up with Young’s Market Company Hawaii, we know their reputation and work ethic is 2nd to none in the Hawaiian market,” Said Chris Kaesman, G.K. Skaggs’ Beer Sales Manager.

Both G.K. Skaggs and Young’s Market Company Hawaii are anticipating success in the Hawaiian market. The initial launch will continue to target key on and off-premise accounts in major metropolitan areas to showcase the classic San Miguel lineup. This will be backed by heavy display and point of sale activity, as well a variety of consumer events that will occur in late 2013 and throughout 2014.

“We are excited at the opportunity to distribute San Miguel on the islands. With the extensive Asian culture in Hawaii and the historic success of San Miguel globally, there is nothing but success for our future. The potential is limitless. On behalf of Young’s Market Company Hawaii, we look forward to a great partnership and the ability to grow the brands within this portfolio to new heights. Our teams are ready” said Philana Bouvier, Executive Vice President General Manager, Young’s Market Company Hawaii.

Known for its refined, smooth and balanced beers, San Miguel has been brewing in Southeast Asia since the late 1800’s. For over 100 years, San Miguel Brewery has been creating top quality beers for drinkers who thirst for the distinctive taste of a classic beer. San Miguel is the largest brewery in the Philippines and one of the world’s top beer producers. With much anticipation, San Miguel Light, San Miguel Red Horse, Cerveza Negra and the classic San Miguel Pale Pilsen have been recently launched in select regions of the United States. Make sure to visit us on Facebook.

Young’s Market Company was founded in 1888 and is one of the oldest continuously operating companies in the United States. In the 68 years since Young’s Market Company decided to engage exclusively in the sale and distribution of wine and spirits, it has grown from a relatively small local distributor servicing Southern California to the fourth largest wine and spirits distributor in the United States. Young’s currently has operations in California, Hawaii, Oregon, Washington, Alaska, Idaho, Utah, Montana and Wyoming.

In 2014, G.K. Skaggs will celebrate 30 years of beer and wine imports and distribution. Founded in 1984, G.K. Skaggs. has become a nationally recognized top 10 importer in the US. It specializes in the sales, marketing and distribution of Premium and Specialty Imported beers and wines across the United States. G.K. Skaggs’s portfolio includes top quality wine and beer imports from Europe, Latin America, Asia and the Pacific Regions. G.K. Skaggs is a longstanding member of various Industry Associations, such as; NBWA — National Beer Wholesalers Association, CBBD — California Beer and Beverage Distributors, PLMA — Private Label Manufacturers Association, the IBA — International Beverage Alliance and WSWA — Wine & Spirits Wholesalers Association. With customer service and product quality as their top priority, G.K. Skaggs continues to stay ahead of the industry. For more information on G.K. Skaggs, please visit http://www.gkskaggs.com or the company’s Facebook and Twitter pages.