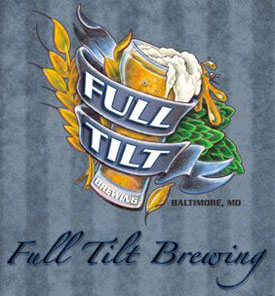 Brewing their beers in Baltimore, FTB tries to incorporate as much Charm City as possible into their beers as a tribute to the city they adore. It only made sense that when it came time to brew a stout they would incorporate Baltimore’s legendary dessert, the Berger Cookie. The Berger Cookie can be traced back to 1835 when German immigrant Henry Berger arrived in the United States and opened a bakery in East Baltimore. The Berger Cookie recipe has been owned and baked by DeBaufre Bakeries, Inc. since 1969, becoming the go-to fudge treat around Baltimore and earning the nickname, “The Anytime Cookie.” Now, like the fudge and shortbread wafers themselves, Berger and Full Tilt have collaborated to bring you the ultimate chocolate beer. This rich, creamy Sweet Stout will draw you in with its cookie aroma and leave you craving more after your last chocolaty sip.

As of right now this beer is slated to be served around the region as a seasonal offering through the winter. However, the option is available to them to continue serving this year-round should the demand still be there.

This newest addition to the FTB line of brews continues that mantra.