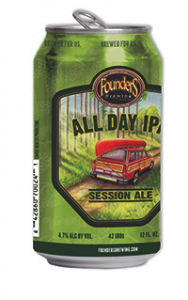 GRAND RAPIDS, MI – Founders Brewing Co. announced today that they will expand distribution to the United Kingdom with beers available across the nation beginning in June of this year through a partnership with specialty beer importers James Clay. Both year-round and seasonal beers will be available in bottles immediately with draft expected to follow later in the year.

John Green, President of Founders Brewing Co., said of the partnership, “We’ve been looking at export opportunities for a while now, and we’re excited to partner with James Clay in making the United Kingdom one of our first international markets.”

“We are delighted to bring Founders Brewing beers to the UK market,” said Ian Clay, Managing Director of James Clay. “Founders is one of the most respected breweries in the world, brewing a truly world class portfolio of beers. Introducing beers of Founders’ calibre to the UK is a fantastic addition to an increasingly diverse and vibrant UK beer culture.”

Interestingly, the Founders portfolio includes many beers that represent their own take on classic British styles. Founders beers shipping for the launch will include the following: Porter, Pale Ale, Centennial IPA, Dirty Bastard and All Day IPA.

James Clay are inviting wholesalers to place pre-orders for these Founders beers by contacting them via email.

Established in 1997 by two craft beer enthusiasts with day jobs and a dream, Founders Brewing Co. has made a distinctive mark on the craft beer community by brewing complex, in-your-face ales, with huge aromatics and tons of flavour. Founders is one of the fastest-growing craft breweries in the United States, currently ranking among the top 50 largest craft breweries in the nation.

Founders Brewing Company has received numerous awards from the World Beer Cup and the Great American Beer Festival, and its beers are often rated among the best in the world by RateBeer and BeerAdvocate users. Located in downtown Grand Rapids, Michigan, Founders is a proud member of the Michigan Brewers Guild and the Brewers Association. www.foundersbrewing.com.

James Clay are the UK’s leading importer of Craft and Specialist beers from the United States, Europe and beyond. James Clay, based in West Yorkshire, distribute to the trade nationally. For James Clay images or more information about the importer, please email marketing@jamesclay.co.uk