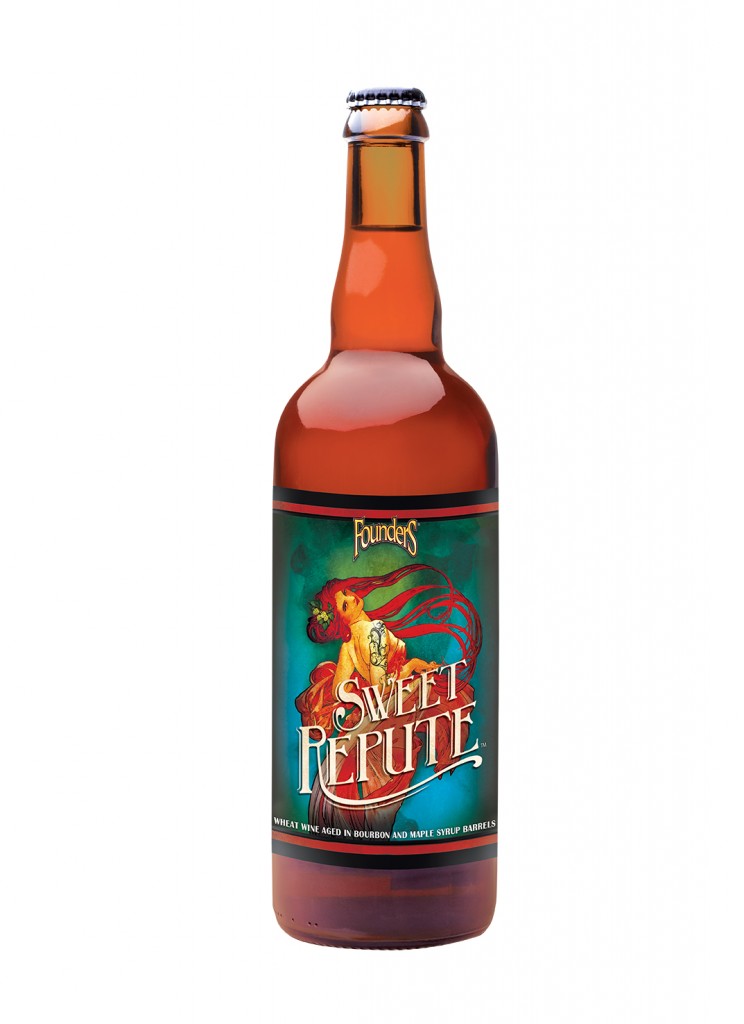 GRAND RAPIDS, Mich. — Founders Brewing Co. will introduce Sweet Repute, a wheat wine aged in maple syrup bourbon barrels, this December to mark the eighth installment in the brewery’s popular Backstage Series. Like all Founders Backstage Series beers, Sweet Repute will be sold in 750mL bottles. It has a suggested retail price of $17.99—$19.99 per bottle.
The Founders brewing team painstakingly choreographed each layer of this beer’s characteristics, starting with a healthy wheat and roasted malt base and adding clean, fragrant hops. It’s one hundred percent barrel-aged in maple syrup bourbon barrels and bourbon barrels over the course of sixteen months, then blended using carefully calculated ratios for the ultimate final product. The resulting 13% ABV liquid pours a bright warm russet with a stubborn ivory head and an intoxicatingly sweet nutty aroma. Founders put Sweet Repute in a larger bottle with sharing in mind.
“We’re excited about this one,” said Co-Founder and Vice President of Brand & Education Dave Engbers. “Every sample we’ve pulled from the barrels down in the caves has been incredible.”
Sweet Repute will join the ranks of Founders’ world-class barrel-aged beers, such as Kentucky Breakfast Stout (KBS), Canadian Breakfast Stout (CBS), Backwoods Bastard, Curmudgeon’s Better Half and many, many more taproom-only ales.
Founders’ Backstage Series is made up of boundary-pushing, experimental beers. The intent of the series is to take the diehard Founders fan experience to a wider audience—though all of the beers are still released in limited batches. Since its introduction in the summer of 2011, Founders’ Backstage Series beers have quickly become some of the most sought-after releases in the industry.
Sweet Repute will be released in limited quantities across Founders’ distribution footprint beginning onMonday, December 2, and will be available at the brewery’s taproom the same week. This will be the brewery’s last Backstage Series release in 2013, with more releases to come in 2014.
About Founders Brewing Co.
Established in 1997 by two craft beer enthusiasts—Dave Engbers and Mike Stevens—with day jobs and a dream, Founders Brewing Co. brews complex, in-your-face ales, with huge aromatics and tons of flavor. Founders ranks among the top 30 largest craft breweries in the U.S. and is one of the fastest growing. The brewery has received numerous awards from the World Beer Cup and the Great American Beer Festival and RateBeer and BeerAdvocate users often rate its beers among the best in the world. Located in downtown Grand Rapids, Michigan, Founders is a proud member of the Michigan Brewers Guild and the Brewers Association. For more information, visit www.foundersbrewing.com.