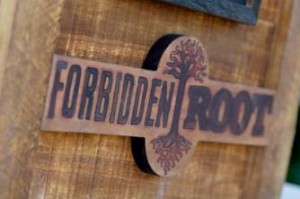 Chicago, IL—Forbidden Root, a new Chicago-based beverage company, will launch its line of innovative botanic craft beers the first week in June of 2014. In the rich American tradition of brewing with natural botanical ingredients, Forbidden Root is reviving the heretofore dormant subcategory of botanic beer brewing into the modern craft brewing scene, having developed a line of all natural, unusual, food-friendly and refreshing flavors combinations. The initial product line, consisting of Forbidden Root, Sublime Ginger and Shady Character, serves as a delicious and utterly unique foundation to showcase both new and familiar flavors to beer fans thirsty for variety.

“It’s exciting for us to be able to say we are the first commercial botanic brewery in the country,” says Robert Finkel, founder and Rootmaster. “Forbidden Root is focused on connections—to the earth, to our heritage and to our friends, to whom we toast with great beer and food.”

To celebrate the launch, Forbidden Root will be taking part in various events throughout the city including a Meet the Brewer event at Franklin Tap on June 5, Kegs for Kidneys on June 6, with more events on the horizon. Forbidden Root beers will be available at Two, Bad Dog Tavern, Little Goat, SmallBar Division and Farmhouse Evanston, as well as other craft beer-focused locations across Chicagoland. As a small batch brewery, Forbidden Root will be expanding its reach throughout the summer and will continue to expand to additional tap handles across the city as well as host and participate in a variety of craft beer events including beer dinners, tap take overs and beer-tail events. For a complete list of upcoming events, please visit its Facebook page.

Forbidden Root will build its brew pub, set to open in early 2015, in the long vacant former Hub Theater at 1746 W. Chicago Ave. Forbidden Root hopes to break ground on its facility as well as to begin distributing the botanical beers in bottles in July. As a Benefit corporation, Forbidden Root will donate all of its profits from non-consumable merchandise to worthy not-for-profit causes — currently the Green City Market. Sourcing local ingredients when possible, Forbidden Root’s mission is to provide a unique fermented beverage experience by designing brews around ingredients that are not usually found in beer.

“Forbidden Root’s philosophy of recipe development is truly unique,” says brewer/operations manager, BJ Pichman. “We craft our brews around herbs, roots and spices. Most breweries start with a conventional style of beer and add a little flavor. Our beers take it a lot further.”

“We go for a coherent idea with a unique overall flavor impression,” says company Alchemist Randy Mosher, “but at the same time our beers are very layered and reveal their complexity over time.”

The Who’s Who of Forbidden Root:

Robert Finkel – Rootmaster. As a refugee of the corporate world, his career spans 25 years of providing capital and support to growing companies as founder of Prism Capital, a Chicago based private investment firm. He travels the world to identify herbs, roots and spices in a lifelong quest to find new and wonderful flavors to share through Forbidden Root. Both methodical, obsessive and creative, Robert is joined by a team committed to pioneer.

Randy Mosher – Alchemist. An all-around craft brew historian and guru, Randy is a globally recognized author and expert in the field of beer and brewing. He has written for virtually every national beer and brewing-related periodical, has lectured to audiences across the world, and teaches beer style and recipe formulation courses at the Siebel Institute. He has also written five books on craft beer and brewing.

BJ Pichman — Brewer/Operations Manager. BJ is an avid and accomplished brewer in the Chicago beer community. He spent 13 years performing data analysis and project management in the market research industry. Over the past 8 years he has brewed with and learned from some of the industry’s most respected minds. From mastering classic styles to experimenting with lesser-known ingredients, his attention to detail and commitment to quality has allowed his interesting and unique beers to win accolades in the brewing community.

Jacquie Armanetti – Brand Ambassador. She began her career working at Paramount Room serving, tending and as beverage program director, where she developed a diverse beer program before focusing her skills on sales for River North Distributing prior to joining Forbidden Root.

Forbidden Root is the country’s first botanical brewery, producing a delicious and highly differentiated line of craft beer featuring all natural flavors. Sourcing local ingredients when possible, Forbidden Root’s mission is to provide a unique fermented beverage experience by designing brews around ingredients that are not usually found in beer. For more information, visit Forbidden Root’s website or follow the brewery on Facebook, Twitter at @ForbiddenRoot and Untappd.