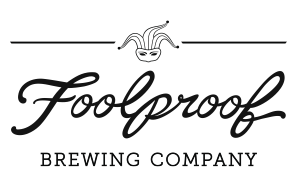 Pawtucket, RI — Foolproof Brewing Company today accounted that it will begin distributing in the state of Connecticut. The company’s beers, which will be available for purchase in cans and draft beginning Oct. 28, are being distributed statewide by Northeast Beverage Corporation, Orange, Conn.

“We are thrilled to expand our distributions footprint into our neighboring state of Connecticut,” said Foolproof’s president and founder Nick Garrison. “This is a big step toward growing Foolproof into a regional beer brand, and we hope this announcement will excite craft beer lovers across Connecticut and all of New England.”

“We are enormously proud of our collaborative partnership with Nick and his Foolproof team in Rhode Island,” said Ken Mancini, president of Rhode Island Distributing Company. “We are equally excited about the opportunity for Foolproof’s brands in the Connecticut market.”

The brewery, which began selling its beers in Rhode Island in January 2013, doubled its brewing production capacity in April and expanded distribution into Massachusetts in May. Connecticut is now the third state to carry the fledgling brewery’s beers.

Foolproof produces three year-round beers, which will be available in draft and 12 oz. can format across Connecticut. These year-round offerings include “Barstool,” an American golden ale dedicated to a night out at the bar; “Raincloud,” a robust porter for rainy days; and “Backyahd,” an IPA for barbecuing and other outdoor activities. The suggested retail price for Foolproof’s year-round beers is $9.49 per six-pack.

Foolproof Brewing Company in Pawtucket, Rhode Island, produces high-quality, hand-crafted beers designed with specific experiences in mind. Whether it be watching a baseball game, sitting at home on a rainy day, or just catching up with friends at the local pub, Foolproof’s goal is to create unique and fulfilling beer experiences.

Northeast Beverage is an independent beverage distributor in Orange, Conn., selling and servicing both the Connecticut and Rhode Island markets. Established in 1992 as part of the Mancini Beverage Group, Northeast is one of the fastest growing beverage distributors in New England, representing a full lineup of beverages, including a portfolio of the top American craft, import and specialty beer brands.