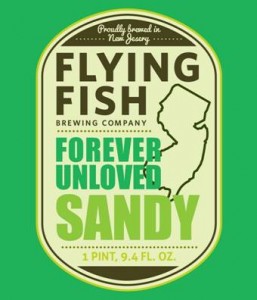 Originally available only on draught, the beer has generated more than $45,000 for New Jersey victims of 2012’s Superstorm Sandy, and a portion of proceeds from the bottles, as well as from branded hats, t-shirts and pint glasses, will also be donated.

“The response to F.U. Sandy was overwhelming, and we’re thrilled to announce this second release to support the continued restoration of our home state,” says founder Gene Muller, who, like much of his brewing team, is a proud resident of New Jersey. “Our first batch of F. U. Sandy was gone in a matter of weeks — so we immediately began working on a second release to satisfy the demand of our fans and expand our efforts to restore the New Jersey coastline.”

F. U. Sandy is brewed with a 50/50 blend of Two Row Pale Malt and American White Wheat. It is hopped with experimental hop ADHA 483, which had never been used in a beer before this one. The beer boasts a beautiful, tropical nose of mangoes and guavas that accentuates its soft mouthfeel and contributes to an ale that is truly one-of-a-kind — much like the beloved Jersey shore. It will be available in 750-oz. bottles, and the instantly recognizable logo will also appear on a line of hats, t-shirts and pint glasses, available online, with a portion of proceeds also donated to storm recovery causes.

Muller and his team hope that this second release of F.U. Sandy will generate an additional $25,000 for charitable and non-profit organizations devoted to supporting New Jersey’s recovery from the historic storm.

In 2012, Flying Fish moved into a new facility in Somerdale, making it the largest brewery built in the state since prohibition. The move allowed Flying Fish to quadruple production. The facility also boasts many sustainability features to brew beer in the most environmentally friendly way possible. Flying Fish produces a range of beers year-round, as well as some seasonal specialties. They also produce the Exit Series, a special selection of beers highlighting the state of New Jersey through the various exits of the New Jersey Turnpike.