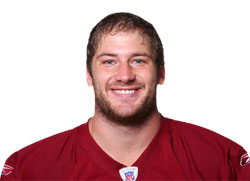 FREDERICK, MD — After zero hours of negotiation, hearty handshakes, and minimal amounts of rabble, Flying Dog Brewery has agreed to supply Washington Redskins tight end Chris Cooley with a case of beer after each game remaining in the 2012 season.

The agreement stemmed from Cooley’s negotiations with the Redskins when he was resigned by the team in late October. Cooley asked that receiving a case of beer after each game be written into his contract, but the team ultimately denied his wish.

“It was heartbreaking to hear that this stellar athlete was denied the opportunity to have a beer at the end of each hard-fought game,” Flying Dog VP of Marketing Ben Savage said. “In the name of Cooley’s wish and in support of athletes in need, we knew we needed to step in.”

“At the end of the day, we don’t think anyone should be deprived of great beer,” Savage said. “We heard Cooley’s cry for help and we were happy to step in.”