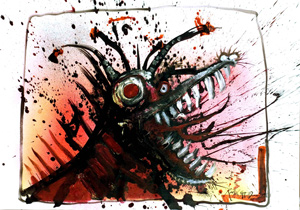 That pet is Kujo, Flying Dog’s Imperial Coffee Stout, which is hitting shelves and draft lines in the mid-Atlantic next week. Once an experimental release named simply Coffee Stout, the brew has now found its spot in Flying Dog’s permanent seasonal rotation.

“The most exciting part of inaugurating a new beer is getting original art for it from Ralph Steadman,” VP of Marketing Ben Savage, said. “What he sent back was terrifyingly brilliant. You can feel the aggression coming off of it, which is perfect for such an intense beer.”

This 8.9% ABV brew is made with locally-roasted coffee from Black Dog out of Summit Point, West Virginia. Flying Dog plans to release Kujo each winter.

“We like to say that Kujo is the savage spawn of two brewing worlds — coffee and beer — colliding,” Brewmaster and COO Matt Brophy said. “But in that collision, it’s important for us to maintain the balance between rich and roasted stout characteristics and the deep, dark coffee notes.”

Flying Dog has the following launch parties planned for Kujo:

“Good Beer, No Shit.” Located in Frederick, MD, Flying Dog is Maryland’s largest brewery. As their tagline proclaims, Flying Dog is committed to producing world-class craft beer and continues to push the envelope with experimental and limited-edition releases. Recent accolades include Doggie Style Classic Pale Ale ranked as the #1 American Pale Ale in the U.S. by The New York Times and Raging Bitch Belgian-Style IPA named one of the best new beers in 2010 by multiple sources. For more information, please visit www.flyingdogbrewery.com.