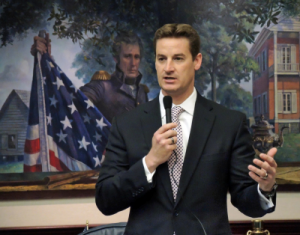 A sweeping bill recently filed by a Florida lawmaker could potentially loosen a number of restrictive regulations faced by craft brewers while simultaneously streamlining rules pertaining to the state’s three-tier alcohol distribution system.

The details of the 50-page bill, as filed by State Rep. Greg Steube (R-Bradenton) will likely face scrutiny from a number of organizations, but its scope is vast and it could be a harbinger for serious change with regards to how Florida’s 90 craft breweries operate.

Steube’s bill aims to revamp Florida’s franchise laws, altering the manner in which brewers and distributors enter into – and depart from – business partnerships. The rules governing these partnerships have become an increasing source of disagreement between suppliers and wholesalers nationally as well as in Florida.

In the most significant change, the bill would enable small brewers — those who comprise less than 50 percent of a wholesaler’s business — to sign written agreements that carry a maximum term of five years. Wholesale agreements signed prior to July 1, 2015 would automatically expire on June 30, 2020.

In the past, small brewers have had a difficult time breaking free from their existing contracts and have needed to provide evidence to support a move.

It’s unclear if larger suppliers like MillerCoors and Anheuser-Busch InBev would be allowed to sign five-year commitments with distributors, but one thing is certain: brewers making up more than 50 percent of a wholesaler’s business — described in the bill as “primary manufacturers” — would have a much harder time terminating wholesale contracts.

Those manufacturers would need to provide written termination notices and show good cause, something brewers both large and small have been unsuccessful at proving in the past. Calls placed to Rep. Steube’s office seeking clarification were not returned as of press time.

Florida breweries would also get the right to self-distribute up to 5,000 barrels of their own beer, something producers have long pined for in the state, under the bill.

Joey Redner, founder of Cigar City Brewing, said self-distribution would be great for other breweries.

“It sets up the minor leagues, so to speak,” Redner told Brewbound. “A brewery can start off small and sort of build a market before they go into distribution.”

The bill would also clarify tasting room exceptions granted to Florida breweries via the state’s “tourism exemption,” something that became another area of controversy recently by allowing brewers to operate taprooms without having to obtain a vendor’s permit. Brewers would be allowed to sell beer for both on- and off-premise consumption at their tasting rooms. The language effectively shuts the door on the contention, as put forth by a group of retail advocacy organizations and wholesale networks, that brewers are currently operating their tasting rooms in a legal gray area.

Those tasting rooms are a vital piece of many small brewery businesses. Ryan Sentz, the co-founder of Fort Lauderdale’s Funky Buddha Brewery, told Brewbound that without the revenue his company generates over the bar, it wouldn’t have been able to undertake its recent expansions.

“It’s beyond important,” Sentz said. “The reason we’ve been able to grow as fast as we have and add more tanks, and a centrifuge, and a bottling line, has directly resulted because of our taproom. It’s paramount. It’s not like, ‘Oh it would hurt us [to not have a tap room].’ It would crush us and a lot of other breweries.”

Funky Buddha made $2 million in revenues in 2014 over its bar alone, he said, where they earn several hundred dollars more on the half-barrel keg compared to when one is sold to a distributor.

The tasting room issue could have ramifications on keeping larger businesses in-state moving forward, as well. Redner said in his company’s search to build a new facility, the ability to operate a tasting room could be critical to its decision to either stay in Florida or take the business elsewhere.

“With the legislation going on, it looks like they could put an injunction on opening future tasting rooms in Florida,” he said. “That could scare us away in the short term. Tasting rooms are very important to the bottom line.”

In an effort to promote awareness for what many beer makers see as an attack on their tasting room privileges, the Florida Brewers Guild yesterday launched an Indiegogo campaign to support its own legal effort. So far, the campaign has raised nearly $19,000.

Currently, brewers in Florida can sell growlers of 32 and 128 ounces, but the industry standard 64-ounce containers are expressly prohibited. The bill would change that by amending the definition of a growler to mean any container created to hold malt beverages between 32 and 128 ounces, including the highly coveted half-gallon jugs.

In 2014, Florida’s brewers exerted a tremendous amount of energy in pursuit of growler reform, but ultimately, the year ended as it began.

The multi-pronged nature of the bill in question means it will likely be met with opposition, but regardless, brewers feel it’s a step toward starting a conversation that needs to be held.

“There’s a lot of lingering issues on both sides,” said Kristopher C. Sentz, the other co-founder of Funky Buddha, describing the combative state of the industry.”I just wish both sides would sit down and figure out what works within both of their limits so we can move on and continue to create jobs and build businesses.”