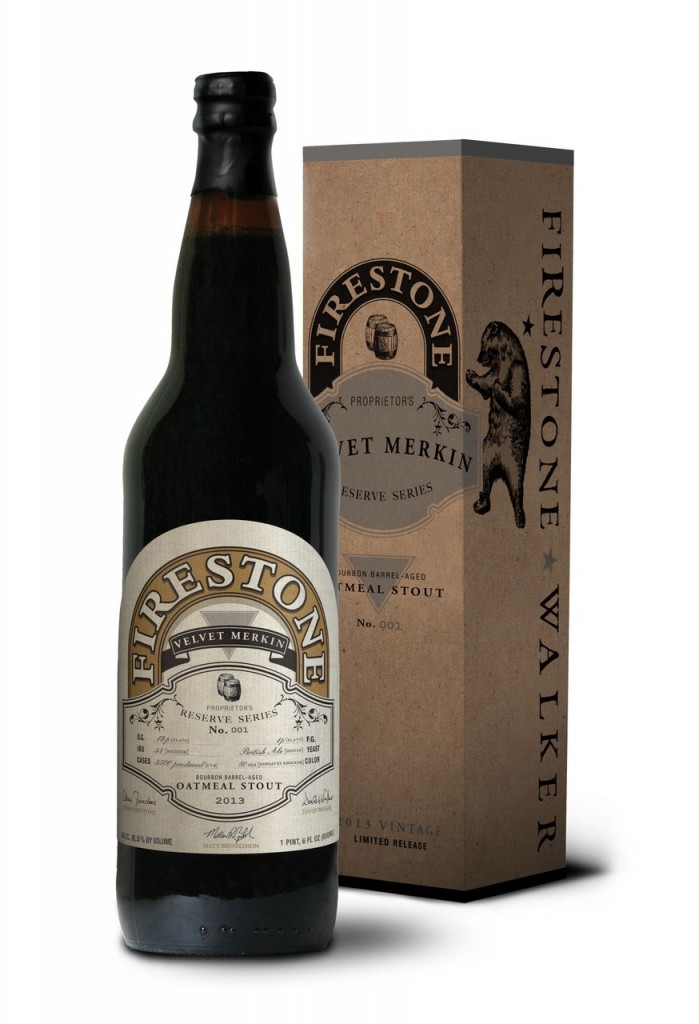 Paso Robles, CA –– Firestone Walker Brewing Company’s Velvet Merkin—the beer that almost wasn’t—will soon heed the rallying cry of “release the merkins,” as it is set to be offered for the first time in 22-ounce bottles starting on September 16.

The Vintage 2013 Merkin is an oatmeal stout aged for a year in retired bourbon barrels from Four Roses, Heaven Hill and others.

While it is not Firestone Walker’s usual style to conceive beer monikers that are confounding, scandalous or comical, the brewery inadvertently achieved all three of these things with the name “Velvet Merkin” once upon a time. The name went off the grid for several years, but now it’s back due to popular demand.

“Until now, all you could get was an occasional peek at Velvet Merkin during a special event or in the brewery tasting room,” said Brewmaster Matt Brynildson. “This beer has earned a cult following, and people have been hounding us to release it—and to keep the name. I think some folks are going to wig out when they learn that it’s finally available.”

With an ABV of 8.5 percent, Velvet Merkin is the first barrel-aged vintage beer that Firestone Walker has released with an alcohol level under 10 percent.

“With barrel aging, it’s easy to gravitate toward higher alcohol beers, because the higher the alcohol, the better the chances that the beer will remain stable in the barrel over time,” Brynildson said. “But we’ve gotten more and more comfortable with putting lower alcohol beers in the barrel, and there’s this interesting synergy when you do that.”

He continued, “Alcohol plays a huge role in the flavor profile of a barrel-aged beer. When you dial the alcohol level down, all sorts of other flavors come to the surface. With Velvet Merkin, the base beer begins with this dark chocolate and roasted coffee character, but after a year in the barrel, it comes out like milk chocolate with creamy vanilla undertones. You still get some of the classic bourbon barrel notes, but the lower alcohol level really allows this unique milk chocolate quality to come to the surface.”

Merkin to Merlin and BackÔÇª

The original Velvet Merkin was made solely for the brewery’s tasting room, starting in 2004. “I always wanted to make an oatmeal stout, and so I started making single-turn batches for the tasting room, just for fun,” Brynildson said.

He added, “I came up with this fanciful name, because I thought it was hilarious. I never thought it would leave the tasting room walls. When we decided to bottle it as a fall seasonal release about four years ago, everyone got cold feet, so we changed the name to Velvet Merlin.”

But the Velvet Merkin name was surreptitiously resurrected by Brynildson and the brewing team after they began aging batches of the beer in bourbon barrels at around the same time.

“Velvet Merkin is the barrel-aged version of that original oatmeal stout now known as Velvet Merlin,” Brynildson said. “We’ve been making this iteration of Velvet Merkin for several years as part of our Anniversary Ale program, and now we think it merits its own limited release.”

While not available to the public in bottles until now, Velvet Merkin has already racked up two gold medals at the Great American Beer Festival.

Get Your Merkin On at “Merkinfest”

Velvet Merkin will be officially unveiled at the “Release of The Merkins” party at Firestone Walker’s Barrelworks in Buellton on September 14. Ticket availability is limited. For tickets and details, stay tuned at: www.firestonebeer.com/events/merkinfest.php