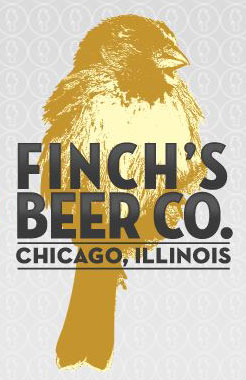 Chicago, IL — Finch’s Beer Company has chosen to move distribution in Wisconsin from General Beverage to Beer Capitol, Frank Beer and the Wisconsin Beverage Group to distribute its brand statewide. The decision comes from the need to reach a wider audience and keep on pace with Finch’s goals for 2013.

“We look forward to a new start, one that will build a relationship over many years with Beer Capitol and their Beverage Alliance partners,” Ben Finch, founding member, said.

With the tremendous support the Milwaukee area has shown the Chicago-based craft brewery, the brand is optimistic about its potential for growth in this area for years to come. Finch’s takes pride in the fact that it is one of the only Chicago breweries to distribute to Wisconsin in recent years and is focused on strengthening its regional footprint through the end of the year.

This wider distribution is set to take effect on September 1.

Since production began in April 2011, Finch’s Beer Co. has been committed to artfully brewing quality craft beer in Chicago. Highly regarded for using the best ingredients in an environmentally responsible setting, Finch’s is led by five core beers: Golden Wing Blonde Ale, Cutthroat Pale Ale, Threadless IPA, Secret Stache Stout, and Fascist Pig Ale. These styles, as well as limited-edition specialties, add to an ever-growing list of unique beers. With an expanded facility established in 2013 and plans for a new brewery and tasting room by 2016, Finch’s is on pace to be one of the largest microbreweries in the Midwest.