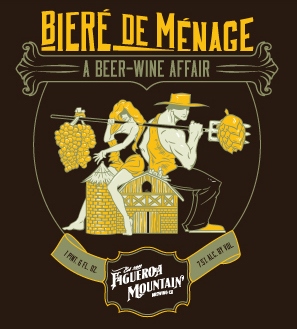 Buellton, California— They say it takes a lot of beer to make great wine, and there is an abundance of both in the Santa Ynez Valley. So what happens when you combine the two? That is the question that Figueroa Mountain Brewing Co. President, Jaime Dietenhofer, and Brewmaster AJ Stoll asked themselves a year ago. After experimenting with creating beer-wine hybrids such as Magpie Porter with Petit Sirah, they were ready to take the next step.

The collaboration came about after a conversation between Figueroa Mountain Brewing Co. and Marina Nicoletti, Specialty Beer Purchaser for Whole Foods Market. “Marina approached us with the concept of creating a collaborative beer with Figueroa Mountain Brewing and a local winery. We loved the idea and knew the perfect partner that was literally hundreds of feet away from our main office, Margerum Wine Co.,” explained Dietenhofer.

It was only natural for Fig Mtn Brew and Margerum Wine Company to team up for this beer-wine blend. The winery has been working with Whole Foods on their “One Wine” program since 2010 and maintains a close relationship with the neighboring brewery. “Having Figueroa Mountain Brewing Company 163 steps from our door is a lifesaver, especially during harvest when a cold brew is so refreshing after a long day,” says Margerum Wine Company winemaker Jason Barrette.

Together with the winemakers from Margerum Wine Company, a team from Figueroa Mountain Brewing Company and Whole Foods Market created a unique Belgian-style beer blended with wine called Bieré de Ménage. This is the first of Fig Mtn Brew’s Liquamentum series which will become its own brand later this spring featuring unique concoctions such as beer-wine hybrids.

For this farmhouse ale, Brewmaster AJ Stoll brewed a pale, dry, spicy French-style table beer and then barreled it down in oak barrels with Margerum’s tropical, floral, bright Sauvignon Blanc from the Happy Canyon of Santa Barbara AVA. “We brewed a farmhouse-style beer from pale malt and imported Euro “noble” hops, or varieties known for very soft, very clean meadowy hop characters. Then we fermented it with a Saison yeast to give it a noticeable spicy, fruity note — the focus of this beer — and left the beer very dry,” explains Brewmaster AJ Stoll. “The finished beer was cold-conditioned for a time before we did the blending trials with Whole Foods — mixing and matching percentages of the beer with various Sauvignon Blanc samples from Margerum Wine Company for their floral, tropical fruitiness and acidity. We then blended the final percentages into the beer and barreled it down into neutral oak barrels where it will barrel condition for another few months to integrate the wine and beer, soften the edges and develop flavors and aromas. Latent wine yeast in the barrel may re-ferment the residual sugars in the already dry beer, drying it further and enhancing the wine character.”

Figueroa Mountain Brewing Co. will be celebrating the release of Bieré de Ménage during a special event on Thursday, May 15 in their Santa Barbara Taproom (137 Anacapa St., Suite F) and Friday, May 16, 2014 in their Buellton Taproom (45 Industrial Way) beginning at 5pm. The public is invited to try this special beer and meet the brewers and winemakers who contributed to the unique blend. A limited number of bottles and beer on tap will be available in the taprooms. This release party will coincide with the release of the very popular, Lizard’s Mouth Imperial IPA. Beer and wine lovers can purchase Bieré de Ménage at their local Southern California Whole Foods Market starting Memorial Day weekend. For more information please visit www.FigMtnBrew.com for details.

Figueroa Mountain Brewing Co. was founded by father and son team, Jim and Jaime Dietenhofer, in 2010. With a passion for craft beer, they set out to pay homage to the beautiful Santa Ynez Valley with handcrafted beer and hand-drawn artwork depicting the local landscape on their labels. They brought on Brewmaster AJ Stoll who now oversees a team of brewers in their Buellton, California brewery. With three locations in Santa Barbara County, Figueroa Mountain Brewing Co. beer can be found in their taprooms or at select retailers and restaurants throughout California. Learn more about #FigMtnBrew or where to find their beer at www.figmtnbrew.com.

Founded in 1980 in Austin, Texas, Whole Foods Market (wholefoodsmarket.com, NASDAQ: WFM), is the leading natural and organic food retailer. As America’s first national certified organic grocer, Whole Foods Market was named “America’s Healthiest Grocery Store” by Health magazine. The company’s motto, “Whole Foods, Whole People, Whole Planet”Ôäó captures its mission to ensure customer satisfaction and health, Team Member excellence and happiness, enhanced shareholder value, community support and environmental improvement. Thanks to the company’s more than 80,000 Team Members, Whole Foods Market has been ranked as one of the “100 Best Companies to Work For” in America by FORTUNE magazine for 15 consecutive years. In fiscal year 2013, the company had sales of $12.9 billion and currently has more than 370 stores in the United States, Canada and the United Kingdom.

Liquamentum is a second label from Figueroa Mountain Brewing Company that aims to explore the possibilities that come from mixing the finest local ingredients with quality craft beer. Literally meaning “concoction,” Liquamentum will take craft beer to the next level with hybrids such as beer and wine blends. The possibilities are endless.

Margerum Wine Company is committed to creating handcrafted wines using only the highest quality grapes so that we can make wines that are indicative of the place where they are grown. We strive to make wines naturally, to make wines that have individual characteristics and to make wines with personality. The scale of production is kept at a level where we can touch and know the wine as it is raised to the bottle — the antithesis of mass production. The standards of quality are measured by our criteria — not by external sources. We make wines we personally enjoy — some to drink young, all for the table, and others for long aging in cool cellars for our children to enjoy.