Donald Trump is the 45th president of the United States.

Despite pre-election polls showing no clear path to a Donald Trump presidency, the Republican nominee defeated Hillary Clinton and will become the 45th president of the United States.

The results came as a shock to many Americans, and the The New York Times called Trump’s victory “stunning.”

In early trading, Constellation Brands — owner of brands like Modelo and Corona in the U.S. — was down more than 8 percent. Cowen and Company had raised concerns that a Trump presidency could impact the company’s stock, because of its Mexican import portfolio aimed at Hispanic drinkers (especially young males).

As of press time, Constellation Brands’ stock was trading at $152.89 per share, down 8.2 percent.

So how did Americans cope on such a volatile night? If orders via online alcohol marketplace Drizly were any indication, they drank … a lot. Sales on the platform were 86 percent higher than a typical Tuesday, the company shared with Brewbound. Most customers were ordering wine (48 percent) but liquor orders grew as the night wore on. Beer accounted for just 23 percent of election-night sales, according to the company.

Voters yesterday approved recreational marijuana use in four states — California, Maine, Massachusetts and Nevada. In Massachusetts, cannabis will be decriminalized on December 15 and the state will begin allowing retail dispensaries to open 2018, according to the Boston Globe.

Lawmakers in all four states will now have to answer a number of legal questions. The Globe walked through many of the issues — including what level of intoxication would be considered ‘drugged driving’ — and are the what kinds of taxes (3.75 percent in addition to the 6.25 percent sales tax) would be necessary to cover costs associated with enforcement.

Arizona was the only state considering legalization that rejected the measure.

Recreational use of marijuana is now legal in eight states and Washington, D.C.

Four states — Florida, Arkansas, Montana and North Dakota — also legalized medical marijuana use, bringing the total number of states allowing some form of cannabis use to 28.

Vivien Azer, a Cowen and Company analyst who will present at the Dec. 1 Brewbound Session, believes recreational marijuana won’t be a priority for Trump.

“We view marijuana as low on the list of priorities for President Trump, in particular as they were voter led at the state level, but we would expect a notable amount of focus on enforcement (in particular depending who is appointed Attorney General),” Azer wrote in an e-mail update. 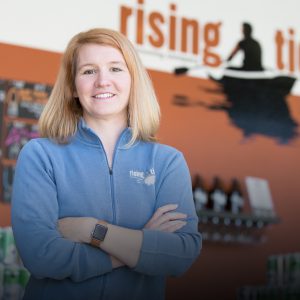 Heather Sanborn, co-owner of Rising Tide Brewing Company, has been elected to the state’s House of Representatives, representing House District 43. Crafting laws and representing constituents will pull Sanborn away from the brewery from January to June in her first term, she told Brewbound.

Sanborn said she plans to lean on her management team and staff to “pick up any slack that might happen as the legislative session ramps up.”

“The larger we grow, the more I don’t have to be the jack of all trades,” Sanborn said. “And I can hire people who are experts in marketing and event planning and work with them to take on that part that I used to manage myself.”

Sanborn, who voted in favor of Maine’s referendum to legalize recreational marijuana, said the impact a yes vote could have on Maine alcohol businesses “remains to be seen.”

“It’s a nine-month process built into our referendum to figure out regulations,” she said. “None of the nitty gritty has been determined. It should be an interesting process.”

As a brewery owner, Sanborn said she was reserving judgement how it might affect her business. However, she pointed to the craft beer tourism that has blown up in her state, which has eased restrictions on breweries.

“We could see legalization have a similar effect,” she said. “It remains to be seen what the business effect of it will be for us. When we vote, we don’t always vote as a business owner. We may just vote as citizens.”

A measure to allow grocery and convenience stores to sell full-strength beer and wine passed in Oklahoma. Sales are slated to begin in October 2018.

The Sooner State was the largest consumer of so-called 3.2 beer (alcohol by weight), accounting for more than 55 percent of the country’s consumption. Even though State Question 792 passed easily, garnering 65.6 percent of the vote, it will face legal challenges. The Retail Liquor Association of Oklahoma, plans to challenge its constitutionality, according to the Oklahoman.

According to Brook Bristow, owner of Bristow Beverage Law and executive director of the South Carolina Brewers Guild, 13 Sunday alcohol sales referendums passed in that state’s municipalities and counties on Tuesday night.

Sunday alcohol sales had been banned in several South Carolina counties, and the new referendum will allow “licensed restaurants, bars and c-stores to sell, and nonprofits to sell at special events.”

Passing a Sunday sales referendum allows licensed restaurants, bars, and c-stores to sell, and nonprofits to sell at special events.

19 to Drink? Voters Approve a Nonbinding Resolution in one Massachusetts District

A nonbinding question to consider lowering the drinking age to 19 received support in Massachusetts’ House 3rd Hampshire District, which covers Amherst, Pelham and one Granby precinct, according to MassLive.com.

The man who pushed the issue, Matthew Malone, a 48-year-old federal government actuary who lives in Washington, D.C., brought the matter forward citing age discrimination. Malone has reportedly said he’d push the question forward in other Massachusetts house districts in 2018 and possibly to a statewide ballot initiative in 2020.