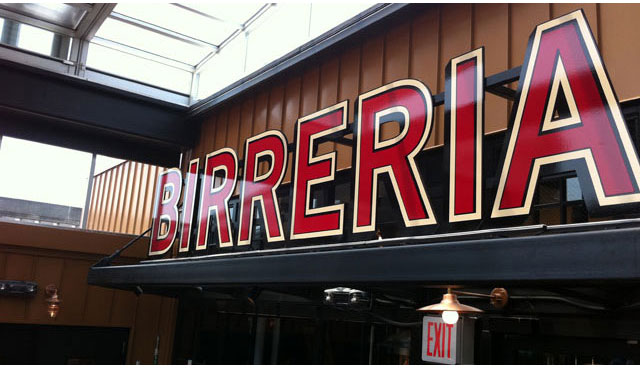 NEW YORK- Sam Calagione has long been viewed as an innovator in the craft brewing scene and his latest project, La Birreria, could be his best work yet.

When he founded Dogfish Head in 1995 with the mission of brewing “off-centered ales, for off-centered people,” even Calagione couldn’t have imagined where making beers with raisins and chicory would take him.

Fast forward 16 years, and he’s hosting a mid-week lunch for over 20 journalists in the shadow of the Empire State Building, on a roof deck off 5th avenue in Manhattan.

“Internationally, we all believe that a rising tide floats all ships,” said Sam Calagione. “If we can help each other, symbolically with collaboration but every day in helping show people how great craft beer pairs with great food — that’s the part of the job I enjoy the most.”

Perhaps the most magnificent collaboration yet, La Birreria – believed to be the world’s first rooftop brewery – is the work of Calagione and his craft brewing friends from Italy, Teo Musso and Leo DiVincenzo.

But La Birreria is just one part of the much larger ‘Eataly’ – a dining and shopping experience that feels more like a culinary tour of Italy than a trip to the market.

14 floors above it all is the 150-seat Birreria, which will feature 3 cask engines, 8 draught lines, 8 wine casks and a food menu that will make you reconsider everything you thought you knew about Italian fare.

Not a single detail was forgotten. A retractable skylight can open up for hot, sunny afternoons and close for cooler evenings. Bright red chairs are simple but elegant. A long bar offers those looking to try one of the freshly brewed cask beers, the ability to experience La Birreria without having to dine.

And it’s the casks that take center stage at La Bireria. Those offerings – the collaborative work of Dogfish, Birrificio Le Baladin and Birra del Borgo — will always be brewed on location and never bottled.

Each brew will receive a traditional Italian woman’s name, and have the same creative flair craft beer lovers have come to expect from Dogfish Head.

“We love the idea of marrying high-end food with high-end beer,” said Calagione.

Wanda, Gina and Sophia are the first to make their way through the lines, with yet-to-be-named beers already in the works. Wanda and Gina will always be on, while the third offering will rotate by season.

Behind each of the brews will be Brooks Carretta, the La Birreria Brewmaster, who formerly apprenticed at all three breweries involved in the project.

In addition to all of the cask beers being made onsite, La Birreria also features draught beers from the participating breweries and other regional craft brewers.

Cured meats, fine cheese, fresh vegetables and gamey offerings highlight a menu – created by Mario Batali – modeled after the cuisine of the Alps.