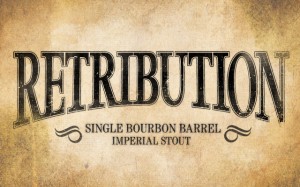 Baltimore, Md.— They say the best things are worth the wait. After aging for six months in charred Kentucky white oak bourbon barrels, this Wednesday, Oct. 22, DuClaw Brewing Company will release its Retribution brew, the embodiment of patience justified.

DuClaw first introduced Retribution to its lineup in 2011, and since then it has been released each October. The a full-bodied imperial stout is jet-black in color with a small tan head, and boasts a complex flavor profile of roasted malt, hop bitterness, chocolate and notes of dark fruit, charred oak, vanilla, caramelized sugar and bourbon designed to compliment chilly fall nights on the deck or near the fire.

“Most people know we’re known for pushing the limits both in brewing and naming,” said DuClaw Owner Dave Benfield. “Retribution is no different. After months of anticipation from our staff and those who have heard the buzz, it’s time to share the hallowed Retribution with our customers and fans.”

DuClaw Brewing Company is a leading craft brewery founded in 1996, and is based in Baltimore, Maryland. The company has released more than 65 unique beers and countless variations and blends, and is available in select liquor stores, restaurants and bars throughout Maryland, DC, New Jersey, Delaware, Virginia and Pennsylvania. DuClaw’s state-of-the-art, 60,000 square foot brewing facility produces over 25,000 barrels per year to keep pace with an ever-expanding lineup of specialty brews. DuClaw also operates brewpub restaurants in Arundel Mills, Bel Air, Bowie and Baltimore Washington International Airport that serve its award-winning craft beers on tap. For more information on DuClaw Brewing Company visit www.duclaw.com, like them on Facebook at Facebook.com/DuClawBeers or follow them on Twitter at @DuClawBrewing.