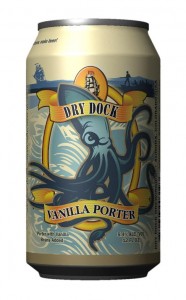 Vanilla Porter was created by Dry Dock co-owner Kevin DeLange and first brewed in 2006 on the 7-barrel brewhouse in the original 800 square-foot tasting room and brewery, known to many now as “South Dock.” This beer is a classic English-style brown porter with more than a quarter pound of Madagascar vanilla beans added per barrel. It was an immediate hit— After winning a Gold Medal at the Colorado State Fair, Vanilla Porter was one of the first Dry Dock home fleet beers made available year-round.

Dry Dock will celebrate the release of Vanilla Porter in cans on Friday, November 28 at Canoe Room at North Dock from 12pm to 6pm. Guests who purchase 6-packs to go will receive free Vanilla Porter koozies.

Beginning in December, Dry Dock Vanilla Porter will be available in 6-packs, in 22-ounce bombers, and on draft in select bars and restaurants throughout Colorado.

ABOUT THE VANILLA PORTER

A brown porter with a generous dose of real vanilla beans added after fermentation, giving it an amazing complexity and a smooth rich flavor. There is nothing subtle about this beer.