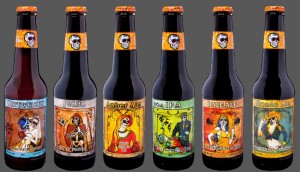 Among the accolades, Life on Tap DRAFT Magazine in the November/December Issue voted on the top beers of 2013 and Drinks Americas’ Day of the Dead’s Pay the Ferryman Porter was declared a winner, receiving a rating of 93 – one of the highest scores. Even more recently, Day of the Dead craft beer landed the cover of leading national culinary and travel magazine, SAVUER and was included in The Saveur 100. Day of the Dead Craft Beer will be included in its 20th Anniversary Edition out in the January/February 2014 issue.

Covering all things beer related in the largest beer producing state in the country, Colorado Beer Girl’s writer reviewed www.coloradobeergirl.com/2014/01/20/day-of-the-dead-mexican-craft-beer-at-la-bibliotecaauthentic Mexican Day of the Dead DOA IPA (Hop on or Die), Hefeweizen (Immortal Beloved), Blonde Ale (Death Rides a Pale Horse), and Porter (Pay the Ferryman) following her discovery of them at La Biblioteca. On the blog, she implores her readers try the brand when given the opportunity commenting, “They definitely beat your typical Mexican beer and, as a side note, they have neat labels.”

Additionally, Day of the Dead craft beer news has been featured consistently covered on Brewbound and Craft Business Daily, both well-known online resources dedicated to the business of craft beer.

“We couldn’t be more pleased with recent recognition of the quality and taste of the best beer brewed inMexico — Day of the Dead craft beer. Being named a top beer of 2013 by Life on Tap DRAFT Magazine and included in SAVUER magazine’s The Saveur 100 as well as featured on its upcoming cover is beyond exciting. It gives us great joy to provide the best and only brewed-Mexico craft beer in the market and look forward to growing our popularity among beer enthusiasts and critics nationwide,” says Joseph Belli, VP of Sales, Day of the Dead Craft Beer.

Timothy Owens, CEO of Drinks Americas, commented, “The continued acknowledgement by the most well-known voices in the craft brewing world is a statement to the quality, consistency and taste of our unique, premium authentic Mexican craft beer line. On behalf of the Company, I’d like to thank Life on Tap DRAFT Magazine, SAVUER Magazine, Colorado Beer Girl, Brewbound and Craft Business Daily for affording us the chance to impress. We look forward to impressing more media, magazines, bloggers, beer enthusiasts, customers and critics in the time ahead.”

Drinks Americas (OTC: DKAM) is the exclusive United States broker for leading premium authentic Mexican beers currently present in over 32 states. The Company is on target to be the leading broker for Mexican beers in each state in which it operates. Drinks Americas’ leading premium authentic Mexican beer brands include specialty Day of the Dead Craft Beer, Mexicali(TM), Rio Bravo(TM), Red Pig(TM) and Chili Beer(TM), which are all brewed in Mexico’s third largest brewery, Mexican family owned, Cerveceria Mexicana, utilizing state of the art processes, fermentation and aging systems. Drinks Americas’ brands continue to forge strong connections with consumers through some of the largest retailers and restaurants in the country. The Company is headquartered in Los Angeles, CA and trades under the ticker symbol “DKAM.”