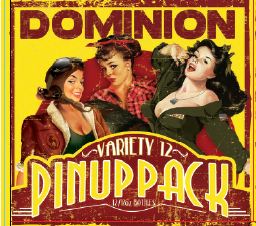 The Pinup Pack will contain Double D IPA, Morning Glory Espresso Stout and GiGi’s Farmhouse Ale. Originally bottled in 22-ounce bombers last year, Double D and Morning Glory made the switch to 12-ounce bottles earlier in the year. GiGi joins them in the 12-ounce format exclusively for the Pinup Pack. She will be replaced by Candi, a Belgian Tripel, in September.

President and CEO of Fordham & Dominion Brewing, Jim Lutz, stated, “Our goal with the Pinup Pack is to introduce more people to Double D, Glory and GiGi. The variety pack gives us a great platform to showcase each beer’s unique personality.”

All three pinups are available in 12-ounce bottles and on draft throughout the Mid-Atlantic region. Double D and Morning Glory are also packaged in six-packs on a year-round basis.

About The Fordham & Dominion Brewing Co.