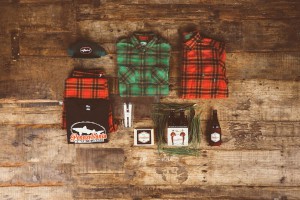 Woolrich, Penn. — Woolrich and Dogfish Head are pleased to announce they are teaming up to bring back the popular collaboration that includes their seasonal ale and an all-new, limited-edition capsule clothing collection. Pennsylvania Tuxedo, a unique pale ale brewed with spruce tips from the forests outside the Woolrich factory, will begin shipping nationwide on October 24, 2016. The clothing line, which features limited “Dogfish Head Plaid” flannels for both genders, will also be available for purchase via each brand’s website October 24, 2016.

“This collaboration is really a product of a shared passion between two American, family-owned companies,” says Dogfish Head founder and president Sam Calagione. “While we might work in very different industries, we both have an intense focus on quality craftsmanship and doing things by hand, all while celebrating Mother Nature in all her splendor.”

Pennsylvania Tuxedo is a spruce-infused pale ale whose name pays homage to the red and black plaid wool outfits traditionally worn by hunters in the deep woods of Pennsylvania. Last year’s inaugural release sold out in a matter of weeks, so the Dogfish Head and Woolrich teams put their heads together to come up with a plan to increase the brew size to meet demands of fans across the country.

“Speaking on behalf of the entire Woolrich team, we had a blast working on this project for another season with our friend Sam and his team at Dogfish Head,” said Nicholas Brayton, president of Woolrich. “It was no small feat to more-than-double the amount of spruce needed for this latest batch. So we shut down the mill for a few days during harvest, rolled up our sleeves and went to work. We think everyone will be pleased with this year’s effort!”

In the end, more than 1,500 pounds of fresh, new-growth spruce tips were hand-picked from the forests that surround the Woolrich mill in central Pennsylvania by the Woolrich employees, family and friends. The result is an 8.5% ABV ale with a grassy citrus kick and resinous conifer notes balanced by dry yet doughy malt backbone. The beer will be available in all 31 states that Dogfish Head distributes in late-October.

In addition to the seasonal ale, Woolrich and Dogfish Head are also releasing a limited-edition capsule collection of Woolrich x Dogfish Head co-branded products to include two versions of Dogfish Head flannels for both men and women featuring two exclusive “Dogfish Head Plaids,” which were designed collaboratively by the two companies. Additionally, the collection will include a men’s pajama set, Made-in-the -USA hat, enamel pin and pint glasses. The collection also features a special edition Dogfish Head Hunt Coat by Woolrich —one half of the iconic Pennsylvania Tuxedo.

The idea behind the collaboration was inspired by a story from the mid-19th century when Michael Bond Rich, grandson of Woolrich founder, John Rich, had an unforgettable encounter with spruce beer. The incident occurred when his father was hosting a barn raising. The young M.B. Rich recalled, “On account of rain on the day set, the raising was postponed a couple of days and the spruce beer which was prepared had acquired a potency not intended. As it was accessible to me, I drank quite freely and, when later on I stooped over to get a drink from the spring, I fell in headfirst and was too much intoxicated to get out.” Luckily, M.B. Rich was saved by a woman who happened to be fetching water from the spring, and the young boy lived to tell the story that helped Dogfish Head create Pennsylvania Tuxedo.

Woolrich has been synonymous with quality outdoor clothing for over 180 years. The company began in 1830 when John Rich built his first woolen mill in Plum Run, Pennsylvania. What has not changed in all those years is Woolrich’s commitment to quality, value, and products that fit the outdoor lifestyle. Learn more at http://www.woolrich.com.

Dogfish Head has proudly been focused on brewing beers with culinary ingredients outside the Reinheitsgebot since the day it opened as the smallest American brewery 21 years ago. Today Dogfish Head has grown into a top-20 craft brewery and has won numerous awards throughout the years including Wine Enthusiast’s 2015 Brewery of the Year. Today Dogfish Head is a 250+ person company based in Delaware with a brewpub/distillery in Rehoboth Beach, an innovative seafood restaurant in Rehoboth Beach, a beer-themed inn on the harbor in Lewes and a production brewery/distillery in Milton. Dogfish Head currently sells beer in 31 states. Learn more at dogfish.com.