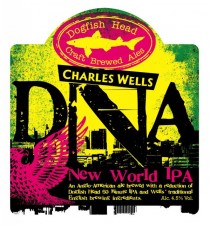 “Rather than simply mashing new ingredients together,” says Tim Sprake, International Sales and Agency Director of Charles Wells, “we’ve taken a special reduction from 60 Minute IPA and integrated it into our own brewing process. In other words, we’ve taken the very DNA of one beer and added it to the brewing process of another. As a result, we’ve produced a beer that is unique and diverse and a little bit special.”

DNA New World has a toasty, nutty start followed by a highly hopped, citrusy finish. It will be available in England on cask starting April 1 and will be bottled and kegged later this year.

The pioneering collaboration will be replicated on the other side of the Atlantic this summer when Dogfish Head brews a cask IPA using a yeast strain from Charles Wells. DNA UK will debut at Philadelphia Beer Week in June, and a team from both breweries will be on hand to celebrate the release.

“We have a mutual respect for Charles Wells,” says Dogfish Head Founder and President Sam Calagione. “It’s been great to work on this project together. We have a flair for originality and doing things a bit differently, and it’s been terrific to explore a new addition to our craft beer range through such an exciting brewing initiative.”

Charles Wells was formed in 1876 and is based in Bedford, England. It combines the tradition and heritage of over 130 years experience with a fresh thinking approach to brewing and running pubs. Through its brewing division, Wells & Young’s, the company has a range of well- loved beers including Bombardier, Young’s, Courage and McEwan’s complimented by a portfolio of premium beers such as Estrella Damm and Kirin Ichiban. It runs over 200 pubs in England and also operates a managed estate of 9 pubs in France. Charles Wells has an established and growing presence in international markets and was listed in the Sunday Times International Tracker for private companies in 2012.

Dogfish Head Craft Brewery makes off-centered ales for off-centered people. Since 1995, Dogfish has brewed with nonstandard ingredients such as raisins, chicory, maple syrup and grapes, changing the way people think about beer. Dogfish believes beer can have as much flavor, complexity, diversity, food-compatibility and ageability as the world’s finest wines.