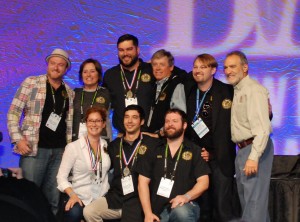 “The Outpost staff is extremely honored to be the recipient of the Mid-Size Brewery of The Year Award. I get to witness the dedication and skill of our production group on a daily basis, and this award speaks volumes of their commitment to quality”, said Nate Olewine, Lead Brewer. “It’s truly a cumulative effort from our entire staff, and we couldn’t be more thrilled with this recognition. At the end of the day, we’re lucky to pursue a craft that means so much to us and our fans.”

“I feel honored to work with such great co-workers”, said Jason Oliver, Brewmaster. “The DB Outpost crew lived up to their high standards and brought home Mid-size Brewery of Year at GABF! I had a feeling they would do it.”

Since its inception, the company has been known for their consistent quality and award winning beers, which have positioned Devils Backbone amongst the leaders in the craft beer industry. Their prestigious collection of national awards includes twenty-seven Great American Beer Festival medals, seven World Beer Cup awards, and fifteen Virginia Craft Brewers Fest medals with three consecutive “Best of Show” titles.

Along with the 2014 Great American Beer Festival Mid-size Brewery of the Year award, Devils Backbone won the 2013 Small Brewing Company of the Year, the 2012 Small Brew Pub of the Year, and the 2010 World Beer Cup Champion Brewery & Small Brew Pub award. The Company operates two breweries in central Virginia. Basecamp, which opened in 2008, is the company’s original brewpub and The Outpost, a modern packaging brewery outside of Lexington, Virginia. The company produces approximately twenty beer styles commercially, with many more experimental styles in production at Basecamp. Devils Backbone beers are inspired by brewing traditions around the world. Vienna Lager, the company’s flagship, is one of the top Virginia craft brands in the Mid-Atlantic, and continues to be one of the fastest growing brands in the country. The company employs approximately 100 people, primarily at their breweries in Virginia. Devils Backbone products are currently available in Virginia, Maryland and Washington DC.

The 2014 Great American Beer Festival (GABF) competition awarded 268 medals to some of the best commercial breweries in the United States, plus three GABF Pro-Am medals. Presented by the Brewers Association, GABF is the largest commercial beer competition in the world and a symbol of brewing excellence. In its 28th year, the 2014 competition surpassed all previous participation records.