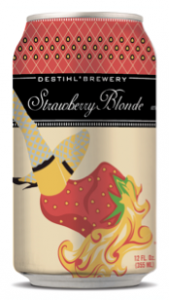 Strawberry Blonde Ale, a bronze medal winner at both the 2012 World Beer Championships and the 2012 Great American Beer Festival┬« (GABF┬«) in Denver, Colorado, in the ‘Fruit Beer’ category, is a 5.2% ABV irresistible, fruited American blonde ale with copious amounts of whole strawberries added to provide flavors and aromas of fresh strawberries and strawberry jam in harmony with a beer that is crisp and dry, golden-strawberry blonde in color, light bodied and balanced by low hop character & bitterness, light malt and fruit sweetness.

The brewery is starting to fill cans today, and they will begin hitting store shelves right away in 4-packs of 12-ounce cans. The cans are currently available in Illinois, and they will soon be arriving in all markets the brewery currently distributes to, including Arizona, Minnesota, Michigan, Indiana, Wisconsin, Iowa, Ohio and Louisiana, with its new markets in Oregon, Washington State, Pennsylvania and Florida getting them soon as well.

“Strawberry Blonde Ale has always been one of our most popular, fastest selling seasonal beers ever since we started brewing it at our brewpub in Normal, IL back in 2008, and now releasing it in cans marks the first time that this beer will be available in any form other than draft kegs and growlers. Other than our sour beers, this is the most highly anticipated packaged beer release from our new production brewery in Bloomington, so we are very excited about getting this beer to market,” said Matt Potts, DESTIHL’S founder, CEO and Brewmaster.

The brewery’s new canning line, manufactured by Cask Brewing Systems of Canada, is part of DESTIHL’s rapid expansion of its production brewery that just started operations last year. The brewery is in the process of expanding again this summer by adding another row of tanks to increase its fermentation capacity from 10,000 to 16,000 barrels annually. Last fall it expanded from 3,500 barrels to 10,000 barrels of annual capacity.

The brewery also plans to begin releasing bottles of its highly regarded, premium sour ales, including its barrel-aged Saint Dekkera┬« Reserve Sour Ales and its Wild Sour Series, by later this summer.

DESTIHL opened its first gastrobrewpub (DESTIHL Restaurant & Brew Works) in Normal, Illinois, in November 2007 and added its second gastrobrewpub in downtown Champaign in April 2011, where the company focuses on both artisan food and beers. DESTIHL’s new 20,000sf production brewery in Bloomington, IL commenced operations on May 31, 2013 and includes a 25-barrel brewhouse, fermentation capacity of 10,000 barrels annually, growing to 16,000 barrels this summer, plus a few hundred oak barrels and French oak foudres in 100,000 cubic feet of barrel-aging space dedicated mostly for its sour ales.