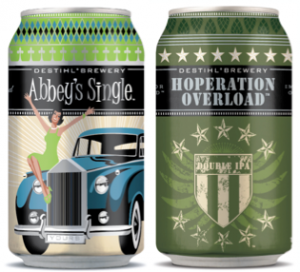 Abbey’s Single, a 4.9% ABV Belgian-style Abbey Single ale, and Hoperation Overload Double IPA, a 9.6% ABV imperial IPA, are in the process of hitting store shelves now. Both brands are packaged in 12-ounce cans, with Abbey’s Single being sold in six-packs while Hoperation Overload is sold in four-packs. The cans are currently available in Illinois, and they will soon be arriving in all markets the brewery currently distributes to, including Arizona, Minnesota, Michigan, Indiana and Wisconsin, with Iowa, Missouri and Louisiana getting them soon as well.

The brewery also plans to release its award-winning Strawberry Blonde Ale in six-packs of 12-ounce cans by late this spring or early summer. This beer won a bronze medal at the 2012 Great American Beer Festival┬« (GABF┬«) in Denver, Colorado in the quite competitive ‘Fruit Beer’ category.

“The release of Abbey’s Single and Hoperation Overload marks the first time that DESTIHL beers will be available in any form other than draft and growlers, so we are very excited about getting our beers more widely distributed, and cans will allow our fans to take our beer to places where glass is not allowed while also blocking 100% of UV rays. Having packaged beer will finally make our beer much more accessible in more places,” said Matt Potts, DESTIHL’S founder, CEO and Brewmaster.

The brewery’s new canning line, manufactured by Cask Brewing Systems of Canada, is part of DESTIHL’s rapid expansion of its production brewery that just started operations last year. The cans are produced by Ball Corporation’s plant in Wisconsin.

The brewery also plans to begin releasing bottles of its highly regarded, premium sour ales, including its barrel-aged Saint Dekkera┬« Reserve Sour Ales and its Wild Sour Series, by this summer.

DESTIHL opened its first gastrobrewpub (DESTIHL Restaurant & Brew Works) in Normal, Illinois, in November 2007 and added its second gastrobrewpub in downtown Champaign in April 2011, where the company focuses on both artisan food and beers. DESTIHL’s new 20,000sf production brewery in Bloomington, IL commenced operations on May 31, 2013 and includes a 25-barrel brewhouse, fermentation capacity of 10,000 barrels annually with lots of room to grow, plus 100,000 cubic feet of barrel-aging space dedicated mostly for its sour ales.