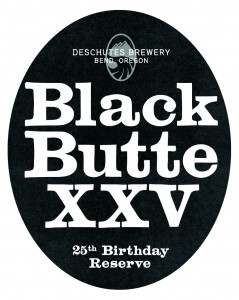 Bend, OR — This year, Deschutes Brewery is toasting 25 years with the 6th vintage of its imperial porter, Black Butte XXV. In order to celebrate in style, this iteration of the annual beer amps it up with the addition of Theo’s cocoa nibs, Mission figs and Medjool dates. The bourbon barrel aged portion of the beer was increased by 20 percent over past versions of this anniversary brew, and drinkers of Black Butte XXV will notice complex notes of vanilla, tart and dried fruit, and chocolate.With everything that’s going on in the flavor profile of this beer, you may have to raise several toasts just to experience it all.

“Twenty-five years in business is a significant milestone for us, and our team wanted to create an anniversary brew that truly marked the occasion,” said Cam O’Connor, brewmaster for Deschutes Brewery. “Not only did we increase the aging amount in barrels for this beer, but we soured a small portion of the final blend. We added a bunch of new ingredients, including black currants. I think fans will find that there are many layers of delicious complexity in this year’s version.”

Both the Bend and Portland brewpubs will be celebrating the arrival of this year’s vintage with Birthday Bash parties on the brewery’s anniversary, June 27. The Portland pub will have a family friendly celebration, with balloon twisters and face painters, plus flights of Imperial dark beers for the adults. The Bend pub will be whooping it up in the back alley with live music from The River Pigs with Scott Foxx & Boxcar Stringband, tasty food specials and killer brews.

Black Butte XXV will be introduced in 22-ounce wax-dipped bottles and on draft to most of the 21 states where Deschutes Brewery beers are sold over the next few weeks, in limited quantities. Although the label states a best after date of June 10, 2014, we recommend drinking one now and cellaring another one to enjoy later. (11.3% Alcohol by Volume; 64 International Bittering Units)

Celebrating its 25th anniversary this year, Deschutes Brewery began as a brew pub in downtown Bend, Oregon and is known for such brands as Black Butte Porter, its flagship brew and the nation’s number one selling craft porter, and the popular Mirror Pond Pale Ale. In addition to its original Bend pub, this family and employee-owned brewery opened a second pub in Portland’s Pearl District in 2008. The company’s main brewing facility is located on the banks of the Deschutes River and produces over 250,000 barrels of beer annually for distribution in 21 states and two provinces. To find out more, visit www.DeschutesBrewery.com