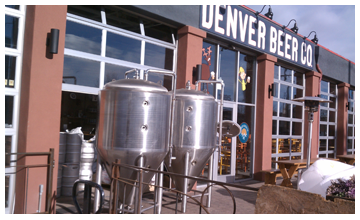 Though the brewery still plans for the majority of its beer sales to occur on premises, expanded brewing capacity will allow Denver Beer Co. to distribute to a limited number of draft accounts at local bars and restaurants. The brewery recently purchased 100 kegs and plans to acquire a delivery van to handle distribution efforts. With brewery patrons on-track to consume over 1000 barrels in 2012, the increased brewing capacity will also allow Denver Beer Co. to support individual keg sales.

“I don’t have kids yet, but when these two beauties emerged from the backside of that semi, I’ll admit to shedding a tear. I think the other fermenters will welcome “The Twins” to the family with open arms.” stated co-founder Charlie Berger. “Our customers will be able to celebrate the arrival of “The Twins” by purchasing kegs for parties and backyard bar-b-ques for the first time.”

Since opening in August, 2011, Denver Beer Co. has sold over 350 bbls of beer. “It is exciting to see our business grow so quickly,” stated co-founder Patrick Crawford. “Within five months of opening our doors we are increasing brewing capacity by 50% to meet demand.”

Denver Beer Co. is currently taking draft requests from local bars and restaurants. Individuals wishing to purchase kegs will be able to do so by mid February 2012.

The idea behind Denver Beer Co is simple. Good beer is best enjoyed with friends, fresh air, and a bit of adventurous spirit to sharpen the palate. Our craft brewery specializes in artisan and seasonal varieties of premium ales and lagers made from the best ingredients around. Brewed with traditional methods and innovative spirit, our beer is always fresh and flavorful. Our beer is serious fun. www.facebook.com/DenverBeerCompany