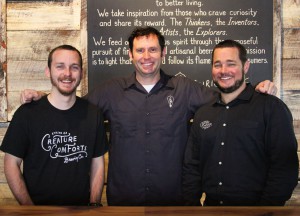 Athens, GA – Creature Comforts Brewing Company recently appointed three pivotal team additions to join its ranks as one of the Southeast’s fastest growing craft breweries. The Athens, GA-based brewery attracted veteran talent including Seth Herman, Dan Herron and Jeremy Lum – each to play an essential role in developing the brand’s rising momentum and bring a wealth of industry experience to the company. In less than two years, Creature Comforts has grown from five full-time employees to 20.

“Quality is one of our six guiding pillars, and for us it encompasses three things: our products, our promotions, and our people” said Chris Herron, co-founder and CEO of Creature Comforts Brewing Company. “As we continue to expand and improve our brewing operations, we need truly great and capable people to influence our evolution. I’m confident that Seth, Dan and Jeremy are the type of people – both on a personal and professional level – that will help us deliver on our aspirations, and we are thrilled to have them as a part of our family.”

In his role as Business Development Director at Creature Comforts, Herman leads all field marketing and sales-driven initiatives. Herman, who worked previously with Creature Comforts CEO, Chris Herron, at Diageo for nine years, brings a wealth of experience to this role. Throughout his nearly 20 year career in the beer industry, Herman has honed his leadership experience and industry knowledge in a variety of senior level sales and marketing positions at industry-leading companies in both the import and craft beer trades.

As Controller, Herron manages financial policies and performance management for the brewery. He brings a fresh perspective and a vast array of financial knowledge from nearly a decade in various finance and accounting roles at a Fortune 500 company. Adding Herron to the Creature Comforts family was an organic transition in many ways – not only is Herron an avid homebrewer, he is also the brother of brewery Co-founder and CEO, Chris Herron. Dan relocated his family across the country, from California to Georgia, to help support Creature Comforts in managing the quality of company performance.

With quality of product serving as a forethought since the brewery’s inception, Creature Comforts worked diligently to develop a dedicated quality assurance program in less than two years of operation – an early milestone among craft brewing standards. As the Quality Control Manager at Creature Comforts, Lum is responsible for developing processes using analytical, microbiological and physical methods to ensure product consistency, quality and improvement. Having a degree in biotechnology and more than four years of experience as Quality Technician at Dogfish Head Craft Brewery, Lum was chosen as an natural fit to further develop the program set in place by Creature Comforts Brewmaster, Adam Beauchamp.

Nominated as one of the nation’s “Best New Breweries” in 2016 by USA Today, Creature Comforts has tripled its annual brewing capacity to 12,000-barrels per year since opening its doors in April of 2014. In addition to enhancing the leadership team, the brewery also plans to expand operations later this February with the arrival of new laboratory equipment and fermentation vessels to help further improve quality and sustain growing demand.

Creature Comforts is an Athens, Georgia based brewery offering finely balanced artisanal beers. Since opening its doors in April 2014, Creature Comforts has made an imprint in the craft beer community with its award- winning, year-round and special release beers.